Another great evening on the VHF bands … 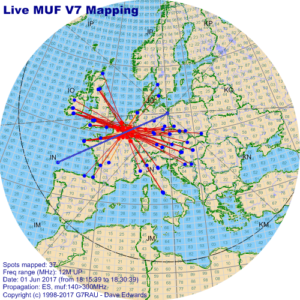 Who would have believed that? 6, 4 & 2 m were completely closed all day. It was just late afternoon that the bands opened in western Europe (G to EA) and early evening finally overhere, too. This time into the south-west, starting with EA6 on 4 m, then moving over to EA mainland. After 17z the MUF rose quickly above 100 MHz and reached 144 MHz an hour later. Clouds were once again too far west from here but the reflection zone moved a bit then allowing QSOs between southern DL and EI. As common with these openings our reflections from the E-clouds then land between northern Spain and the Normandy in the big blue ocean as can be seen on the left hand picture (blue line). But this time the luck was with us as UT1FG/mm was sailing exactly over there! Can you imagine how surprised I was when he answered my CQ call? 😀 IN54 was of course another new square and that one QSO really made my day. 😎 Looking at the path and the to be expected symmetry it certainly also included some 3-400 km tropo extension on his end …

I made a small recording of Yuri afterwards when his signal had already dropped again:

4 m was still hot afterwards but again between south DL and the UK. We were simply to far north to take advantage of that opening (DJ5MN made over 200 QSOs on 4 m today!). But it was very interesting to hear a few G stations on sidescatter beaming into the ES reflection zone! Later 4 m opened slightly into the UK & Ireland direct path but all very spotty. While writing this blog entry (almost 21z) EA1HRR is still audible on 4 m so the MUF is still high. This might be an indication for another great day on VHF tomorrow … keeping fingers crossed! 😉