This one was tricky! When last onsite at the station in September I recognized my N1MMLogger+ installation on the local Windows machine wouldn’t start anymore. Getting really strange error messages. So I had planned some time on Friday to do a reinstall. Unfortunately it didn’t work! 🙁 Deinstalled everything, deleted every single file and folder belonging to N1MM and even cleaned the registry before installing again … no luck. 🙁 Really strange. But what to do now?

Luckily I had my Macbook with me. Besides other stuff I’m running Parallels on it with several virtualized Windows machines and had already prepared one for all the radio stuff. N1MM was working fine and it’s new feature to connect to the Flex via the network for CAT control was very helpful, too. But how to get my canned audio into the radio? Usually you install the Flex SmartSDR software on Windows which then provides SmartSDR DAX with virtual audio adapters you can then choose as the sound devices also in N1MMLogger+. BUT: SmartSDR for Windows does not work on ARM chips and my Macbook is running on Apple silicon, i.e. the M1 processor, no Intel based chipset anymore. Note to myself: take Intel based hardware with you next time, you still have a (very) old one, don’t you? 😉

So I was running SmartSDR for Mac (highly recommended if you are a Mac user!) as my base user interface to the Flex radio. It provides a DAX solution under Mac OS, too. I always wanted to try SkookumLogger for contesting on the Mac but learned now it depends on transceiver built-in voicekeyers which it triggers via CAT but does not provide it’s own voice keying solution. Ugh. Setting up RUMLogNG as an alternative was easy, it has a built-in voice keyer for contesting etc. BUT: Again a but. While it keyed the radio perfectly the radio needs to be in DAX mode to accept sound through the DAX channels. But then I would need to toggle DAX on/off manually if I wanted to use the microphone to answer somebody! No way … N1MM is doing that through CAT commands when playing a canned voice file, i.e. puts the Flex into DAX mode, plays the audio file, then switches DAX off again so you can continue using the microphone to answer somebody. Need to get in touch with Tom, DL2RUM, author of RUMLogNG, maybe he can add that to his code, too, then everything would be perfect and I could do everything under Mac OS … 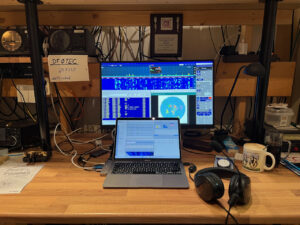 So trying around a bit I came up with a very creative solution! I coupled the SmartSDR for Mac DAX audio input/output into a VAC (virtual audio cable) solution which I then defined as the standard audio interface into the virtual Windows machine. I could then trick N1MM into using this new standard Windows audio device and think it’s a transceiver internal sound card so it would switch DAX on/off automatically. Phew! A few more on-air tests to make sure audio levels were right and everything was working as expected and I was finally ready to go after spending way too many hours to get a working setup …

Concerning the contest itself: lots of fun! Nice to see the upper bands finally well open again! As I’m going to do the ARRL-10M contest this year Uwe, DL3BQA/DM0Y, had asked if he could therefor do 10 m during WWDX-SSB. So I chose 15 m knowing right from the beginning I would have no chance to even win in Germany as good friend Oliver, DL2ARD, was going to do 15 m, too. 😉 But anyway, always strive for the best!

Propagation was much better on Sunday. For comparision: I worked 12x Japan on Saturday but 172x JA on Sunday! Likewise with zone 3 (US West Coast): just 1x on Saturday but 24x on Sunday! Both path’ are very close to the North pole from up here in Northern Germany so very sensitive to solar activity and magnetic disturbances.

Working all the JA’s was fun although some were tough copy due to their low signals at times. Here’s an about 12 minutes audio snippet from Sunday morning if you want to check for yourself. 😉

Working NA on Sunday afternoon with lots of QRM (8:30 min):

This entry was posted in Audio recordings, Contesting. Bookmark the permalink.