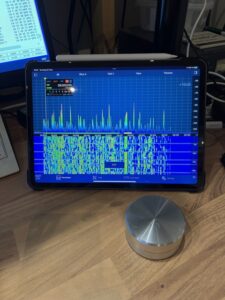 Using an iPad as TRX frontend and a Griffin PowerMate connected via Bluetooth as VFO dial.

I can only partially understand the many comments about how great 10 m was. I was rather disappointed. Geomagnetics were severely disturbed at times, which is certainly more noticeable in the north of DL than in the south, not to mention Southern Europe. I also found the north-south propagation gradient much more pronounced this time. Holger, DL7AU, just 120 km south of me, spotted stations I couldn’t hear 75% of the time, even on the supposedly easier southern path’. South Americans were also untypically weak and affected by a lot of QSB (if I heard them at all) and that direction only opened late on Sunday. Caught just one very weak JA on Saturday, hard work, but at least could log the double mult. Sunday was a little better with 20 JAs in the log but still far from what I’ve been used to during the last sunspot cycle. Similarily bad was that North America was only open an hour later on Sunday and closed an hour earlier than Saturday, effectively leaving just over 2 hours for working NA (this is where the biggest QSO potential is for us). And despite having a QRM-free frequency (Uwe, DL3BQA, checked a few web SDRs from time to time from the sofa at home with a laptop on his knees) there were somehow no real runs. Many of the spotted mults could not be heard at all …

On the other hand, some stations had strong circulating echoes, and with a few stations I first had to turn the antenna away in order to weaken the signal and then get readable Morse code out of the “continuous tone” (i.e. overlay from direct tone and echo). It also took me a moment to identify Mike, DL2OE, who lives just 80km away: troposcatter signal, F2 backscatter signal and circulating echoes … three signal path’ at once, uhh. 😉 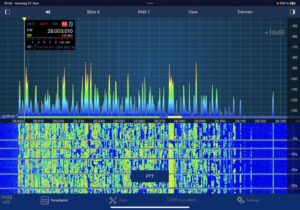 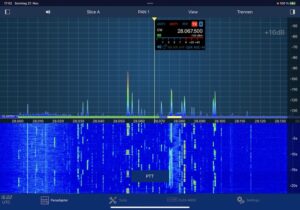 So all in all it was kind of weird and a bit unsatisfying. But, what’s the use of whining? I could move to the south. 😀 E.g. 9A5Y was 4-5 S-levels louder than me in DX land! You can’t compensate for that no matter how much power and antennas you install up here … so we just have to live with it and compete with ourselves. 😉

Nonetheless it was still quite some fun. 😉 Now let’s see what the condx will be like in ARRL10M in two weeks. Hope good ol’ sun will have calmed down a bit by then …

This entry was posted in Contesting, Equipment, Propagation. Bookmark the permalink.