Antenna work during VHF contest May ’21

We had planned to do a multi op entry in May’s VHF contest last weekend again. Besides this I also wanted to do some antenna work. It turned out antennas were more interesting 😉 and we were not in the mood to really contest much so only a handful of QSOs were made on 2 m, 70 & 23 cm. 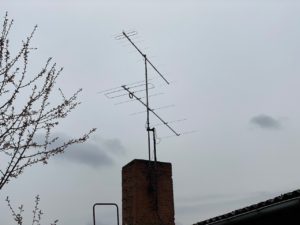 Re antennas I had bought a new 4 m LFA so took down the 6/4 m duoband beam and put that up instead. It should provide for a bit more gain on Four which is appreciated running QRP power only. The old duoband antenna will find a new home at DL3BQA’s house so he will be able to work on 6 & 4 m with his newly aquired IC-7300 from home, too, not just from the club QTH.

This entry was posted in Antennas, Equipment. Bookmark the permalink.