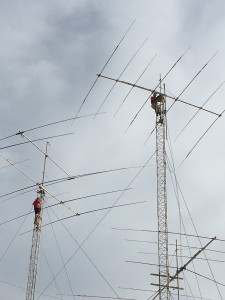 Quite good progress on antenna work during the last two days. Pictured left are Ben, DL6RAI (left), and John, W2GD (right), on two of the towers. They both arrived Monday evening here on Aruba to take care of the antennas. Ben is just mounting the new 80 m dipole that Tom and I built today while John is taking care of the upper USA beam.

It’s really amazing what the Caribbean climate is doing to the material. There’s constant wind and very salty air that is giving all the material up on the towers a really hard time. We have seen corrosion effects we would not have thought being possible.

John is a real animal. 😉 He’s doing all the antenna repairs up on the tower, i.e. dismantling the elements, handing them down to ground and after exchange of the traps and rebuild of a bit of aluminium mounting everything right on the tower again. A real professional and all that being 66 years young! Amazing guy …

The lower EU antenna is working again with acceptable SWR, too. Seems part of the fault were a few loose connections. John saw it on his way up on the EU tower and directly took care of it. Plans are to finish repair of the upper EU antenna tomorrow. So we would at least have two rotatable high band antennas (yes, the EU rotator is turning again, seems it “only” got stuck due to not being rotated often enough and climate taking it’s toll … the rotator on the USA tower was changed today, too) plus the Shorty-40 and dipoles for 80 & 160 m and could do M/2 in ARRL DX CW next weekend. 🙂

Got some QSO requests for the WARC bands. Seems there’s not that much activity by the active P4’s (well, most of the big stations are contest stations so that’s to be expected). We have a GP for 30 m but signals were not that great the times we tried. It should work on 17 m, too, will give it a try during the next few days. Will also built a 12 m dipole tomorrow sloping it down from the 40 m tower and using the SteppIR’s coax for it. Just hoping condx will pick up again a bit during the next few days, the recent flare had quite a negative impact on 10 m (at least into Europe).

BTW: When not spending time on the radio or doing antenna work you’ll usually find us around some of Aruba’s really nice beaches. 😎 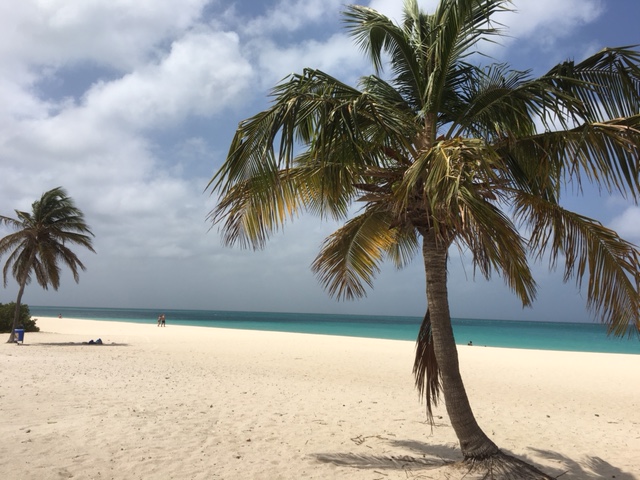