One would think it’s total nonsense to struggle through a 48 hours contest for only 250 QSOs. Except, you are a bit crazy and/or a total fan of the 10 m band. Well, I’m probably both! 😀 On the other hand I managed to triple my last year’s score (while doubling the number of QSOs) last weekend … albeit with about double as much time spent on the radio (15 h last year vs. 28 h this year). So it’s proven once more that BIC time (“butt in chair” time) really pays off! 😉

The contest this year conicided with the peak of the Geminids meteor shower which makes sure there are plenty of meteor reflections that sound like “mini band openings” on 10 m for people not aware of it, i.e. you hear signals for a few seconds or minutes and suddenly all’s gone again and the band is silent. While I had reported of my MS activities on VHF in the past and talked about ufb reflections on 2 m it’s even better on 10 m as the time ratio of reflections between both bands is about 30! So a one second reflection on 2 m (which is plenty of time to transfer QSO information using digital MS modes like FSK441 or MSK144) is about 30 seconds long on 10 m and thus useful for fast CW/SSB meteor scatter contacts! At least if both parties know about it and speed things up accordingly! The Geminids shower is known for it’s good and long reflections, during maximum they can last as long as 30 or even 60 seconds on 2 m. Now you can do the math yourself how long that reflections will last on 10 m. 😉 Result is: Sounds like a small Sporadic-E opening of a few minutes duration and enables contacts up to about 2.000 km! The real challenge is that people are not aware of that kind of propagation. They just think “hey, it’s sunspot minimum, 10 m is dead anyway, let’s do something else this weekend” so the number of potential QSO partners is rather sparse. Quite a pity … 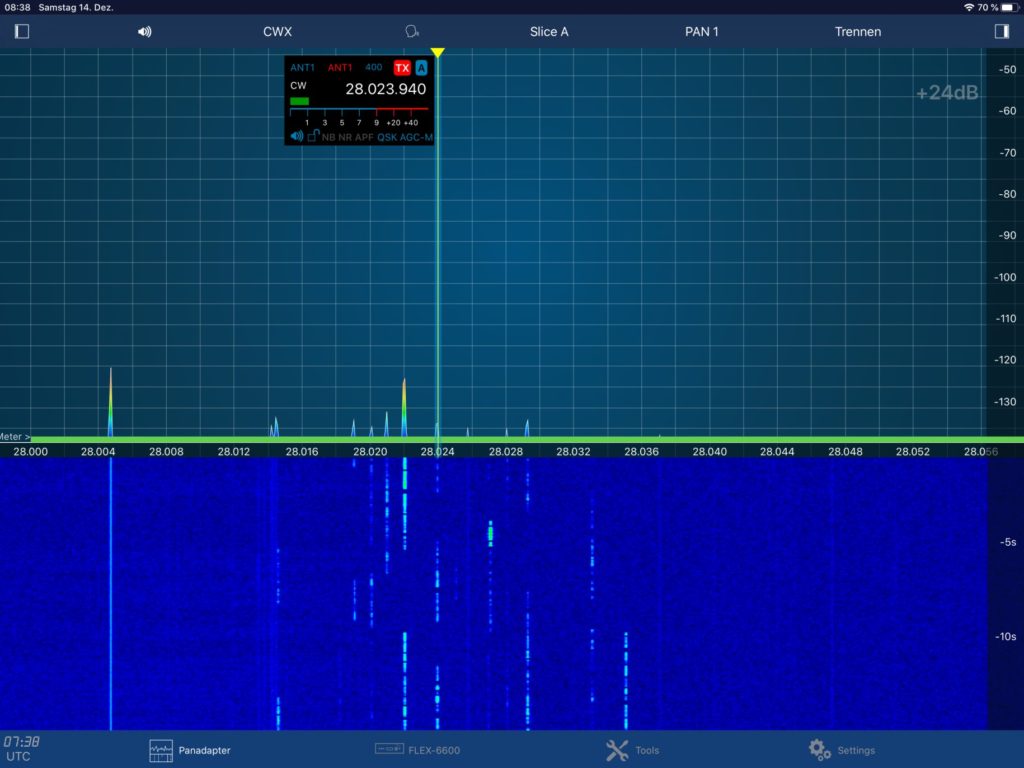 This is how Meteor Scatter “looks” like. The signal on 28.027 MHz is faintly audible via Tropo or Iono Scatter and then suddenly gets much stronger around the -5s mark for almost 2 seconds due to a meteor reflection. The signal on 28.024 MHz was strong via MS but became weaker and weaker as the ionization of the according meteor trail started to vanish around -6s and is almost gone when the screenshot was taken (i.e. the 0s mark – screenshot taken at 7:38z on Saturday).

Saturday morning was dominated by MS QSOs. In general reflections were much better on Saturday than on Sunday (which correlates perfectly to the Geminids peak time). But we had some good (i.e. real, not just sounding like) Sporadic-E to France & Spain on Sunday lasting for about 4 hours but as mentioned above, just few people QRV so not many contacts. Thus Sunday was a real “endurance day”! Made 170 QSOs on Saturday and just 80 on Sunday … go figure!

But of course there’s real DX on 10 m, too, even in sunspot minimum! You just have to catch these openings. 😉 How they really work is a bit of guesswork … were it different meteor reflections geographically perfectly lining up? Very unlikely, even with just 2 “hops” (i.e. 3-4.000 km distance). Most times it’s probably a combination of MS + ES or even double-hop ES as there is the small additional maximum of Sporadic-E in December/January (the so called winter ES season). On the southern path’ it might also be a combination of MS + F2 or ES + F2 or even MS + ES + F2. But no matter what it really is, it’s so fascinating it motivates me enough to struggle through such a contest! 😉

Now what could be worked for “real” DX? Saturday morning (around 7z) I was called by VK4CT – I was almost falling off my chair! Signal was extremely weak and while I got the VK4 the first time I had to ask for several repeats to get the suffix right. When sending his number sigs were up again a little, tsss. 😀 I heard VU2BGS two times and called him but did not even get a QRZ. Around 10z he then called me for an easy QSO (and he was not louder than before, maybe less local noise for him then). The southern path’ were more stable, FR4QT and V51WH could be heard (and worked) several times during the contest on SSB. V51YJ was a good catch on CW. Around 13z I was called by N5DX from NY! He was a 319 to 419 at best and I really hope the QSO was okay. Oliver, DL2ARD, worked 3 x USA around that time but unfortunately nothing else over here. At 16z PX2A was a solid S9 signal. On Sunday EA8RM, EA8AQV, EA8/IK1PMR and EA8OM could be worked (all between 11:15 and 11:45z), around 12z L55D made it into the log for another multiplier. PX2A was loud again at the same time but both were the only signals audible from South America so propagation was really selective! I was also happy to be called by 6W1TA around 13z. Boy, he was so loud I couldn’t believe it at first. 😉 Half an hour later FY5KE finally made it into the log, too, after I had heard him in the noise already before. It seems like especially the path to French Guyana is more often open than we think even during “no propagation times”, have worked the guys every now and then during the last few month’ and this time they were even only running low power! Really amazing …

That was it for the real DX. MS condx died down rather fast on Sunday, too. I only made 7 local contacts between 14 and 19z so even I 😉 was jolly well fed up and called it a day then. As there were so few SSB contacts I sent in my log for the CW-only category like last year. Speaking of SSB I finally figured out how to configure N1MMLogger+ correctly so it switches on/off DAX on the Flex automatically for the canned messages without influencing local voice operation. It turned out to be just one little checkbox … oh well. 😉