ARRL-10M & trying out some MacOS software

No big entry in this year’s ARRL 10m contest. Besides other commitments over the weekend I used the chance to play a bit with the new MacOS version of SmartSDR released by Marcus, DL8MRE. Compared to the free-of-charge Windows version it does cost some bucks but to my mind is worth every penny. I was already used to his iOS version so basically no problem in using the MacOS version now. It’s quite feature-rich with added functionalities like a built-in digital mode interface, support for a CW paddle (something I still have to try, i.e. solder a suiting adapter) and local CW sidetone (! … Flex users will understand, hi), simple logbook, a.s.o. A more detailed description is available on his website.

SmartSDR for MacOS among many other nice features includes a DX cluster client and shows (clickable) spots directly in the spectrum display – neat! 😉

For logging I used RumlogNG which includes a superb contest module and is really easy to use. I did already migrate all my personal logbook data into RumlogNG but still keep data in VQLog on Windows, too. While VQLog has many (special) features for VHF enthusiasts that will certainly never make it into the more common general purpose loggers, there’s just one feature I really miss in RumlogNG when doing QSL management: just send a card to new band/mode contacts! Doing lots of contesting that really saves a lot of paper! Maybe I didn’t find it yet or it would really be a worthwhile feature request to Tom, DL2RUM, as that’s probably something a lot of people might desire … 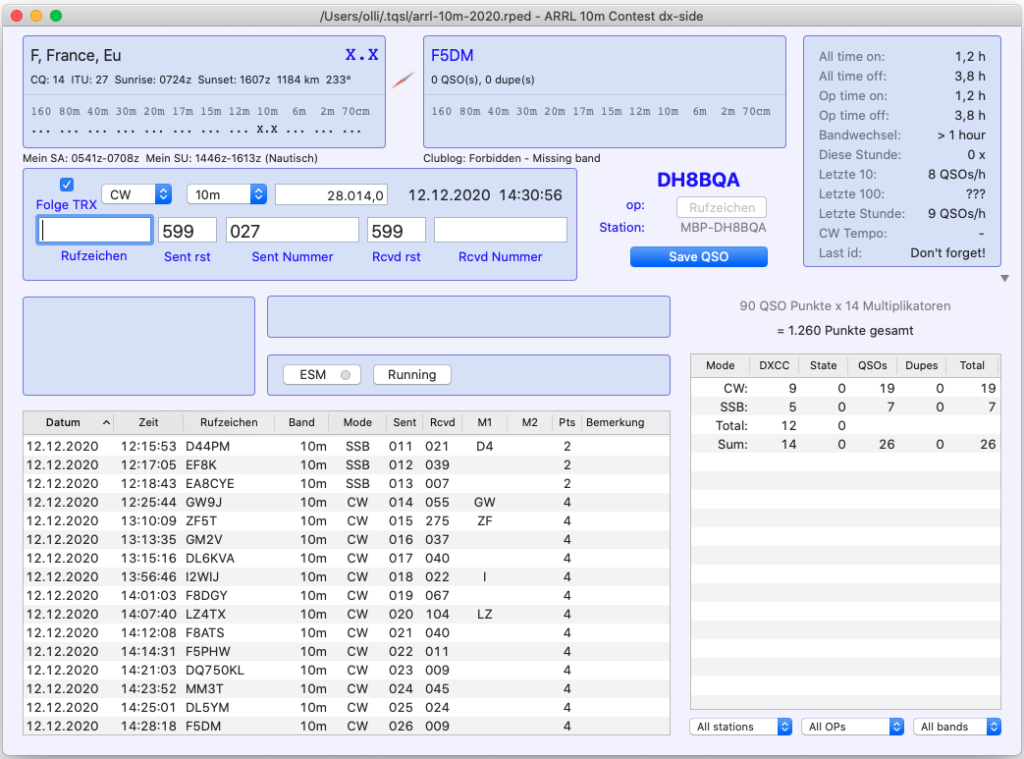 Only problem in using the combination FlexRadio with RumlogNG is there’s no native support for Flex’s CAT interface in RumlogNG. A real pity! 🙁 There’s a workaround using Kenwood CAT over network which indeed worked … but only once! Never got the two to communicate again. 🙁 So will have to dig deeper into this topic before I can use RumlogNG for more serious contesting. Until then the excellent N1MMLogger+ will still serve me well (installed on a dedicated Windows machine as well as virtualized in MacOS).

So with all this stuff tried out I did make a few contest contacts, too. 😉 Condx were not good at all. Although there’s quite a good chance to catch some winter ES in mid-December it was not much this year. Geminids meteors helped a bit, too. Noteworthy DX worked included FR, PY, LU, CE, D4, ZF, V5, FY, HC, YV, KP2. Very patchy openings, lots of times no signals at all. Called it a day on Sunday afternoon after handing out nice number 123 … 😀

(PS: Screenshot including QSO data added after the log deadline only!)

This entry was posted in Contesting, Software. Bookmark the permalink.