My decision to start SOSB10(A) was made a few days ago already. Last year I did indeed set a new DL record although I would not have expected my result to stay above the record after the log check. Obviously my logging accuracy was not as bad as expected. 😉

It was also good enough for a World #4 finish! 😎 Usually there’s a 50/50 chance at the end of May to get some good Sporadic-E openings and have lots of fun on 10 m as was the case last year. Seems I was rather unlucky last weekend. 🙁 But read on …

While we had some good openings during the week Friday already saw the band closed most of the day. Got up early Saturday morning to check for any early openings. Nothing on 10 m yet so had a quick scan through 40 m to hand out a few points. Seems low band condx were quite nice, ufb signals from the U.S. (even a few West Coast hrd/wkd) and also P44X, our BCC guys on Aruba, had quite a nice signal. Up on 20 m conditions were even better! Was looking for some longpath openings into the Pacific but there were none … but shortpath instead! Great signals from the U.S. West Coast and a few KH6s booming in at 59+ signals as well as KL7 – ufb! E51DWC was a very good catch, too. 😎

But I was there for 10 m, wasn’t I? Band opened around 6:30z into UA6 via ES. It later shifted more south enabling QSOs into most of the Mediterranean countries including North Africa. Around 8z it opened into Spain. That E-clouds were also strong enough to allow a number of backscatter QSOs into almost all of Europe providing the needed multipliers. I was also heard by the J68HZ-# skimmer for quite a while but nobody worked from the Caribbean, seems propagation was very spotlight over 3 ES hops. Ten closed around 10:45z over here.

It took almost 4 hours to open again, so plenty of time to get some lunch and hand out a few more points on 15 and 20 m inbetween. 10 m opened literally over the same clouds again into Spain and got linked into South America for about 20 minutes. So I was lucky to catch a few PYs as 3 pointers, too. Unfortunately activity was very low that time thus only 20 QSOs worked during that 1,5 hours opening. A single EA2 answered my CQs about an hour later but that was it for Saturday, just 135 contacts worked. Repaired the 20 m rotator interface during the evening and handed out a few more points on the lower bands. 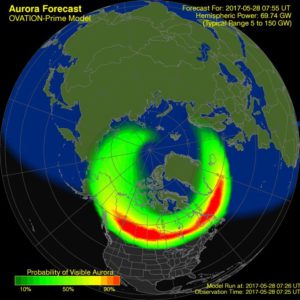 Getting up Sunday morning found the bands in very bad shape. While P44X was a reasonable 539 on 80 m (but didn’t hear me) there was no stateside to be heard, neither on 80 nor on 40 m. Didn’t sound good, bands were also very noisy. A quick check of the propagation websites revealed the reason … Aurora! Lots of spots on the DXcluster already from Scandinavia working AU on VHF. I could also hear the SK4MPI/B Aurora warning beacon on 2 m at 51A. Thus gave it a try on 10 m, too, beaming North and was glad to be called by LA3BO at 7:26z for an interesting Aurora contest QSO with it’s typical sound. I had worked Svein numerous times on 2 m via Aurora before so was glad there were two experienced VHF OPs on both sides of that contact to make it work. 😎

Unfortunately nobody else on Aurora but a few troposcatter and groundwave contacts as well as some Meteor Scatter, i.e. with PA3AAV (took a few minutes to complete the number exchange, thanks for your patience, Gert). As is almost common on 6 m there was some Aurora-E after the Aurora on 10 m, too, providing big sigs from Finland but only 2 stations worked.

A small ES opening to Romania followed with two strong YOs in the log. Besides this there was at least some weak backscatter zones, mostly beaming East, that allowed for a number of additional QSOs across Europe (interestingly mostly Germany). But activity was still very low. I can certainly understand the people who are participating all bands to skip 10 m with such bad propagation and rather spend their time on the lower bands with high(er) QSO rates. Last QSO was at 12:30z, number 178 to be exact.

10 m stayed closed all afternoon. Likewise 15 m, almost no signals at all! Even 20 m had no DX signals, only a few Europeans. Must have been very frustrating for all the Allband guys, too. But I didn’t want to give up that easily. After completing 6 bands with 9A1A and DF0WRTC I decided to start CQing on 10 m again. And if it was just for another 2 or 3 troposcatter or groundwave contacts (although I had probably worked all of the “locals” already). Suddenly I got weak skimmer spots from UA4 and OH so it seemed there would be another opening. And yes, it was. Starting to Northern Scandinavia and Baltic states around 17z with 40 to 60+ dB skimmer spots then from SM2 & OH6. 😎 About 18:30z there was a strong Sporadic-E opening from Western Europe to Northern Scandinavia on 6 m, too, so I decided to beam straight into that E-cloud cluster. Glad I did, it provided lots of ES backscatter QSOs across all of Europe as well as direct path to the UK and even PA & ON confirming the high MUF of that clouds. This time there was plenty of activity, it seemed everybody was trying to grab that last chance. 🙂

At 19:42z the PJ2A-# skimmer started spotting me, seems there was another 3-hop opening into the Caribbean! At 20:18z also the J68HZ-# skimmer heard me again! But it took until 20:28z for the first Caribbean contact when John, P40W, called me being very weak. Knowing he is only running low power that certainly explained his weak signal. But then it should be possible to work “our guys” at P44X as well. Found them a few minutes later CQing higher in the band and made it into their log after a few calls, too. 🙂 Band was good enough for another half a dozen QSOs until it finally closed at 21:30z …

That 4,5 hours opening certainly made up for all the boredom during Sunday afternoon. Glad I didn’t call it a day earlier. But that’s something I have learned during the last 28 years being a radio amateur with a special addiction to 10 m. 😉

Even if the total QSO amount and final points are way below earlier results this weekend yielded in some interesting propagation studies again. We had Groundwave, Troposcatter, Meteor Scatter, Sporadic-E, Backscatter, triple-hop ES, Aurora, Aurora-E and who knows if the South America contacts didn’t involve some F2 or TEP after the first hop with ES. That’s something only 10 m can provide. But you have to be there not to miss any of these openings … 😉