As mentioned in my WAG blog post I was not sure what to do in CQ WW SSB. We usually do 2-3 Single Band entries in the big SSB contests altering year by year who has the first band choice. This year it was Uwe’s (DL3BQA as DMØY) turn and he went for 15 m hoping for some useful conditions. So what should I do? Go for 10 m? Probably dead as a door nail. 20 m? Sideband? Oh no, even with high power and a 4 ele Yagi one’s rather QRP and with low/bad conditions everybody is on 20 m during the day making it a splatter festival. Doing one of the low bands? Without dedicated RX antennas? Certainly not a good idea either. So maybe a pseudo allband entry (SO5B) just handing out a few points?

Currently QRL is eating up my stamina quite intesively. I was driving the 700 km from Cologne to Schwedt on Thursday. Started 5:30am but needed to stop at 7 o’clock and take some more sleep in the car. I was just too tired and it was dangerous with flapping eyes so definitely the right decision. After a 3 hour break it was much better and I could continue my journey home. Arriving there was just time for a short hello to my mother then I fell asleep again on her couch for another 4 hours. Seems the body is taking what it needs … 🙁

To build up additional antennas, i.e. our 80 or 40 m groundplanes, was not feasible on Thursday as it was raining all day long and still a bit on Friday. And to be honest I was not in the mood to do so, either. Went shopping for the weekend on Friday afternoon (bought way too much … always the same problem 😉) and then took the 20 km to the station. Peter, DM5DX, was guest OP’ing since Wednesday. I wanted to take my final decision how to operate later that evening. Well, I did! Decided to go sleeping and leave the station to Peter to do some low band ops during the first contest night. 😉 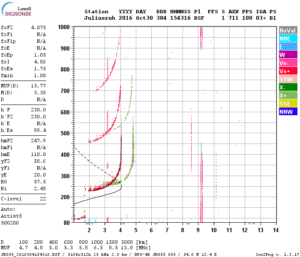 Waking up Saturday morning I was still not in the mood to battle in splatter so decided to go for 10 m. It should be rather quiet there so probably a good chance to relax. 😉 Expected some 100-150 QSOs if at all. But even in sunspot minimum there are some scattered openings on 10 m, you just have to catch them! First QSO was with SP9KAO on tropo scatter, second one with DFØHQ for the DL mult. As the band was closed I decided to check the lower bands and hand out some points there. Boy I was glad about my decision not to choose a lower band entry. Bad condx there, too, which was to be expected with the solar data (left side picture shows a live view of Sunday afternoon’s solar data in Juliusruh, about 120 km north of my location) and QRM, QRM, QRM. Splatters all around! In recent times I really do not like SSB much anymore but have more fun doing CW and RTTY contests.

Around 8z 10 m opened to Bulgaria on Sporadic E, later to the Middle East and Africa, too. Around 11z there was a really huge ES cloud above France allowing a.) to get into TEP propagation into South America and b.) being strong enough to provide some good backscatter allowing contacts into most of Europe! So I could indeed run for about 2 hours with a best 60 min rate of 112 Q’s – who would have thought that?

In the afternoon there were short phases allowing runs, too, but not as good as before. So it was mainly chasing the mults. The North/South propagation differences were really prominent this time. I heard Mike, DL2OE, who lives about 90 km south of me, calling for stations that where not even audible up here, even with our 6 ele OWA Yagi 20 m high. Matthias, DGØOKW/DL5L, on top of the Thuringian Forest about 350 km south-west of me, worked about 30 mults more (lots of Caribbean mults as well as XW, VK, etc. in the mornings), all not audible overhere. It certainly helped that he had 2 transceivers and 3 antennas pointed into different directions all the time while it was pure SO1R with just one antenna overhere. Judging from the reports Southern Germany even seemed to have direct F2 and/or TEP propagation. Last QSO (# 360) on Saturday was 18z with a just 40 km distant SP1 station.

Sunday saw the band opening at 8z again, this time via Sporadic E towards UR & UA6, later on to YO & LZ. Unfortunately activity was not very high so not many new contacts made it into the log. For a few minutes the ES coupled into progation to the Middle East so I could at least grab the missing mults down there. It was real spotlight propagation, something I find exciting all the time. 😉 After 9:45z the band opened to Italy and Greece providing a few more new stations but again no high rates. Around 12z the band closed completely, not a single signal left. After 13:45z it opened again to France with a nice ES + TEP link allowing to work South America again. Unfortunately only 2 new stations in the log. After 14z the band was closed completely again. I was short of pulling the plug and calling it a day but was hoping for another short opening to at least push me above the 500 QSOs mark (was at #475 then). Seems the propagation god heard my prayers 😉 as there was another E-skip opening after 16z to EA5 and I1, again with super strong signals but all very localized. Got called by a very loud 3A2MG for the last new mult around 17z – you gotta love these Sporadic E openings. 😎

After 17z the ES linked into TEP to SA again, too, so I could work a few more 3 pointers. Doing 15-20 QSOs per hour might not be the rates others are looking for and yes, I’m getting adrenaline rushes from 200/hour as well 😎, but it was certainly more pleasant in my current mood than doing the SSB QRM masochism on the lower bands. 😉 Last QSO (#531) was at 19:40z. Only noise afterwards so I finished the contest on 10 m half an hour later. Even with Sunday being much worse than Saturday I was still quite satisfied with the result. Might have been due to the low expectations?! 😀

Went to the low bands again handing out a few more points but I was fed up after half an hour so finally flipped the switch. Last QSO was with BCC fellow LX1ER on 80 m …

After packing the car and wanting to drive the 20 km back to my mother’s place I had a completely flat tire. You can’t use that around midnight local time! 🙁 Luckily I had an emergency kit in the car and could repair it to get back into town at least …

Now I need to take the decision what to do during CQ WW CW in 4 weeks? Single Band? Which one? SOAB? Oh boy … First of all let’s keep fingers crossed that condx will pick up a bit again! 😉

This entry was posted in Contesting, Propagation, Sporadic E. Bookmark the permalink.