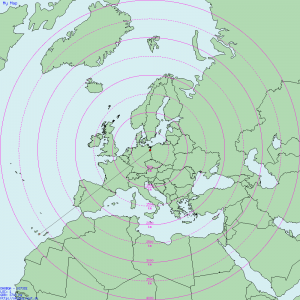 During the great 4 m opening tonight I saw the MUF rising slowly. Later first QSOs were reported on 2 m between G/GW/EI and the Mediterranean and when I saw ES geometry should be right I switched over to 2 m. Nothing happened except a few locals CQing on 144.300 MHz and I put out a few CQs myself, too, without any response. At some point I had this gut feeling something was going to happen (You know these moments, too, don’t you?

) thus started to tune the band. Heard a very weak station on .310 but no positive ID. Tuning below the calling frequency reaching .290 I thought wow, great, a Spanish sounding station, just finishing a QSO with DL1RNW, band must be open to Spain via Sporadic E. When he ID’d as EB8BRZ I almost fell of my chair! 🙂 The Canary Islands via terrestrial propagation on 2 m (double-hop ES) – something I had dreamt of for some 20+ years being active on the VHF bands! Gave him a quick call, he responded with call and report, sent him my report and switching back to receive I just heard him fading down into the noise. He later confirmed he got my report all okay. 😎 He came up a few times some minutes later but never making it really out of the noise again.

Found out later the weak one on .310 was probably EA8AVI. Well, that would have been another great QSO but hey, I need some dreams for the next 20 years, too. 😉