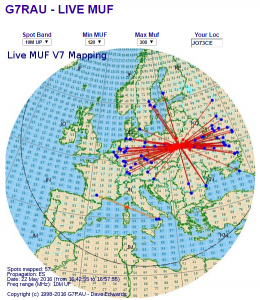 Finally caught the first 2 m ES this year! 🙂 6 m had been hot all afternoon. Later also 4 m opened up nicely. It was kind of masochistic listening to all the activity on 70 MHz and not being able to join the fun. 🙁 But it was a good indicator on how conditions would evolve. Around 16z OIRT started heavily on 4 m direction east so I kept an eye into that direction. Also 6 m was full of TV birdies which suddenly stopped while OIRT was still strong – a clear sign of rapidly rising MUF as with higher MUF skip zone shortens dramatically on 6 m meaning being in a distance to the ES cloud you just won’t receive the low VHF QRM anymore, you would need to move closer to it. But hey, then you would be too close for 2 m over the same cloud. 😉

144 MHz opened at 16:28z but it only lasted for about 1.5 minutes, just enough to complete a CW QSO with US6IEW. The band was more consistent further west, I was not in a perfect position in JO73 geometry-wise. Five minutes later US6IEW popped out of the noise again answering my CQ call, this time in SSB. Band closed again after 2 minutes or so. It then took another 10 minutes to open again, this time for about 8 minutes.

UY1HY and UX5UL were quite short distances on the same cloud that was used by West-DL and PA to work further into Russia and East Ukraine. Seems there were 2 active spots or one really big cloud with different active zones.  Here are a few audio recordings again:

The MUF dropped quite rapidly afterwards but 6 m stayed open until late into the night. Sporadic-E even linked into a good Caribbean opening around 11 pm local time … albeit not on 6 but on 10 m. 😉