As you know my station at home is remote controllable. I’ve been doing remote ops for 7 years now and the station’s (remote) capabilities have been constantly expanded throughout all the time. One major change I did was installing a dedicated DSL line exclusively for remote ops about 1.5 years ago. Until then I had been using the WiFi connection we had for our club station at the same location but bandwidth there is very limited and was just not enough anymore when changing from a remoted frontpanel detached IC-706 to an IC-7100 to the K3 plus 2nd RX over time. The new line using VDSL2 enabled me to have a 16 Mbit down and 2.5 Mbit up internet connection (and theoretically going up to 50 Mbit downstream) using a local carrier (SDTelecom). They currently only support the later Fritz!Box routers by AVM. I like them a lot for their features and hate them for their poor RFI performance. After installation it only took one second of keying a transmitter with more than 50 watts on 10 m to wipe out the connection. Quite bad if you are depending on that line to do the operation. After figuring that out I was lucky being able to directly talk to the provider’s tech guys and our solution was to downgrade the line to ADSL2+ with still 16 Mbit down but reducing upload to something like 1.5 Mbit. Connection was stable ever since but operating outside the minimum requirements they have, that is at least 10 dB SNR on the line while my line only provided some 5 dB SNR. Nevertheless it worked reliably without any problems, just a bit of trouble when being on 160 m which is a common RFI problem with ADSL lines. No problem for me, good compromise as I’m more interested in the higher bands and 10 m especially. 😉 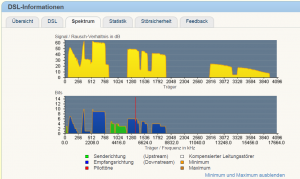 About 2 weeks ago I killed my DSL again operating on 10 m. A quick check on the router revealed the line was back to VDSL2. So I called the provider to let them switch back to ADSL2+ again but this time they refused to do so as they had to do some changes at the DSLAM and were not going to support ADSL2+ anymore, especially not with parameters below the minimum. And their argument was better quality and stability with VDSL2. Well, after explaining them this would not work due to RFI they connected me to the tech guys again. This time I had a really great guy on the phone who was very knowledgable also concerning RFI and the likes. While he confirmed they were not going to put the line back to ADSL he acknowledged seeing the issues with my VDSL line in the connection logs on the DSLAM side, too. His suggestion then was to simply filter out the DSL frequency sub-bands where the interference occured (I was not even aware this was possible on a DSL central switch) and the problem should be gone. He asked me to try 5 minutes later again. Well, it really worked! As you can see on the picture above there are a few distinct notches in the DSL spectrum now. These were exactly the frequencies where the DSL sync carriers (pilot tones) would have been so with the notches in place the sync’s now automatically use different frequencies. I was not able to kill the line anymore in the few remote tests I did. 🙂

After being home now over Christmas I took some time today to systematically test everything again, i.e. doing all the bands, different power levels, different antennas, different antenna directions, a.s.o. There is still some interference at a few different points but none of them is really doing any harm, i.e. connection is stable, there’s no data loss, no CRC errors, etc., all fine. 😎 It does look quite heavy on the spectrum plot below, i.e. the brown line marks the available SNR during transmits on different bands but it’s a combined spectrum plot, it’s not all in parallel and the DSL mechanisms (like bitswaps) take care of it automatically.

While 160, 80 & 20 m are direct interference, i.e. on the transmit frequency, the 10 m interference is strange as it happens at about 7 MHz. It took me a while to figure out why. AVM is making use of simple SDR techniques! I.e. they are using SDR TX/RX with a quadrature mixer! Thus 28 MHz oscillator frequency (and interference!) will result in 7 MHz sample frequency at the frontend …

So all is working stable and reliably also with VDSL2 now and yours truly is a happy camper again. 😎 Nevertheless I reported all of these issues to AVM, too, in the hopes they will take the feedback seriously and invest a little more into RFI protection. They already did so in their firmware, i.e. with the latest firmware versions the problem was less prominent than in their early firmware releases. So they are working on it. Nevertheless to my mind they do have a real design flaw at least in their Fritz!Box 7390 (and probably in other boxes, too, looking at several issue reports on the internet) which really puts a bad mark on their otherwise superb product(s).

This entry was posted in Equipment, General stuff. Bookmark the permalink.