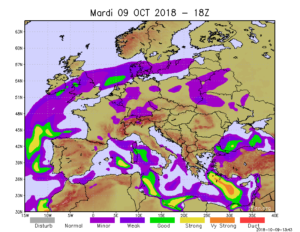 Germany has been experiencing a great indian summer during the last few days. Nice high pressure zone, clear blue sky, warm temperatures … we usually call it a “Golden October”. As a VHF guy this kinda “smells” like Tropo is in the air. Suffering from a flue I was at home today so checked the great F5LEN tropo forecast and indeed it confirmed my gutt feeling, there should be a bit of tropo to the west, i.e. England. Therefor I kept the 2 m antenna beaming west this afternoon and was not too astonished when I suddenly heard G1XWX calling CQ. A few more Gs followed but no big distances, seems it was just extending a bit to UK’s east coast. Anyway, it’s always nice to add some new calls to the log and/or meet old friends again!

Gave it a quick check on 10 m in-between, happy to see the band open to the South at least. Besides working the SW8DX IOTA expedition I could also catch 9XØT on CW. They were extremely weak, no more than 419 at best, but had good ears and after repeating my call a few times they finally got me. 😎

Then I saw a few cluster spots about Polish guys working VHF-DX to the east thus swung the beam eastwards, too. There was plenty of activity on 144.174 MHz, the designated FT8 frequency on 2 m. Besides lots of SP2/3/9 the following QSOs were made:

While I can work the SP7/8, LY & EU guys almost every day the QSOs with R5WM/KO72 and UT8AL/KO61 were unexpected! Seems there was some tropo ducting into that area, too, although not reflected on the forecast. That once again confirms you have to keep an ear/eye on the band and not just trust any forecasts. 😉 But there was really lots of fading, no stable duct, so maybe that’s why.

Alex, UT8AL, was using just 20 watts, so FT8 shined again, according to the signal strength’ the QSO would not have been possible in CW/SSB. Signals of R5WM became as loud as +0 dB from time to time so it would have worked at least on CW, too. But he was too busy with FT8 …

Before I had to shut down and change QTH back to the YL’s one I gave a few CQs in CW on 144.300 MHz which led to the following fine contacts:

To be honest these were the more satisfactory QSOs of the day … you call yourself, no computer, you hear some whispers in the noise, try optimizing the antenna, getting it out of the noise, decoding one letter after the other to form a full callsign in your own head then realizing which fine DX just called and lay back with a big fat smile in your face! 😎

So far FT8 could not deliver that feeling. While I see it’s advantages and therefor use it, too, I really hope it will not be FT8-only in the future because people are just too lazy and make it easy by just clicking around a bit on the computer screen (if at all and not automating things, automated QSOs are just machine to machine, this has nothing to do with amateur radio anymore). As long as it is just complementary I’m fine with it. If it ever turns to FT8-only (yes, there are signs of it

) I’ll certainly need to search for another hobby. And that’s from someone who is burning for our hobby … but let’s think positive. 😉