Now having played with the radio for a few days it’s maybe time to give some feedback on my first impressions. Setup was a breeze! Be it all the menu settings, recording voice files for the internal voicekeyer, programming the CW memories or setting up the spectrum display to my liking was all done within a few minutes! Maybe I do have an advantage here as a long time owner of several Icom rigs in the past. So for me it was all very intuitive, good job, Icom!

Unfortunately there were no big ES openings yet so judgement for strong signal handling on 6 & 4 m still has to wait. Sensitivity at least seems excellent as far as I can tell. Worked a few tropo QSOs on 4 m with some “locals” and it “feels” comparable to the very good HA1YA transverter. Also did a few Meteor Scatter contacts this morning without any problems.

I’m not sure about HF performance yet. As Six & Four were not much open I played a lot on HF, too, and worked quite a number of QSOs. I didn’t experience the OVF (overflow) light yet but I do run with attenuation on the low bands anyway (no matter which radio, band noise is moving the meter high so no need for extra gain). The radio sounds excellent on the higher bands, i.e. 12 & 10 m. I’m not yet decided concerning the lower bands. It “felt” a bit noisy/unruly but it might well be the current conditions and lightnings all around Europe. Will need to keep an eye on it and will probably do the WPX-CW next weekend with the radio, too.

The spectrum scope is great value especially when monitoring “dead” bands. You don’t wanna miss that elusive opening, do you? 😉 I find the built-in recorder quite handy, too. I had an 8 GB SD-Card surplus to my needs so it went into the radio. It can now record up to 135 hours of audio! Also the voice memories for the built-in voicekeyer are stored on the SD-Card. You could even fine-tune them on a PC if needed. And did you know that the radio can even do screenshots? Cool stuff! 😎

This one shows an OIRT station from Russia (well, there actually were two small Sporadic-E openings into that direction yesterday early noon) wiping out about 70 kHz of spectrum with it’s wideband FM signal: 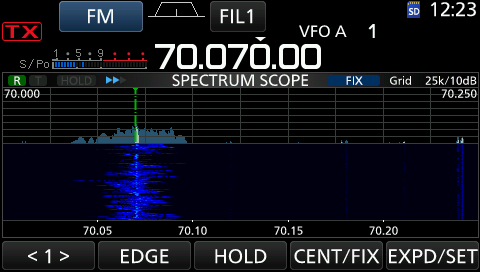 And here’s an according audio snippet:

While it sounds a bit distorted and certainly not WFM quality 😉 it is still intelligible. Four hours later there was another short opening bringing up another OIRT station this time with a much broader FM signal wiping out about 150 kHz of spectrum rendering our small “DL band” of 70.150 to 70.180 MHz useless: 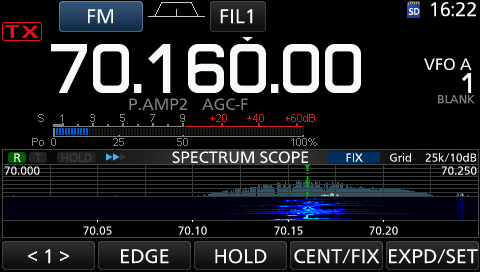 The broader the WFM signal the less the intelligibility, of course:

So the IC-7300 has some really nice and handy features I already like a lot. 😎 I also installed the USB driver and had the radio up & running with CAT control and digimodes within minutes! It can’t get any easier …