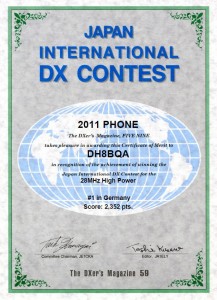 Thought it might be a good idea to participate in this weekend’s JIDX-CW contest. I participated in the SSB leg in 2011 and had quite some fun. They make some nice contest certificates, too, see left. But condx are awful right now so no fun at all. 10 m was pretty much dead the whole Saturday, nothing heard at all during the morning and only a few weak South American stations in the afternoon. Sunday morning was a bit better, at least I could hear & work a dozen JA’s although most signals were just above the noise and despite 600 W and a 4 ele Yagi the JA’s were struggling to hear me – ouch! 🙁 Only worked 3’s, 4’s & 6’s call areas. Heard a very weak JA1BPA but he was not able to dig me out. Later on the Russians working the Gagarin Cup got stronger but I was only looking for JA’s. Now in the afternoon the band is dead again, only signal audible is FR4NT on SSB, nothing else. Well, this is how it will feel daily in no more than a year, I suppose. Maybe we will be lucky to see 10 m condx return this autumn again before the final decline. I have my doubts but let’s try not to loose optimism. 😉