Wednesday saw a massive sun eruption not expected (especially that strong) being so far down the solar cycle already. In fact it has been the strongest solar flare in Cycle 24! spaceweatherlive.com has an interesting article about it. 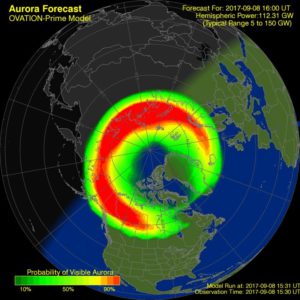 After hearing about it on Wednesday evening and knowing most of it would be earth directed it was clear there would be some radio Aurora around about 48 hours later. That’s the time it needs to travel from sun to earth to then hit our  planet’s magnetic field (which is protecting us from the rays’s effects mostly) and produce Aurora. I took care to be able to get home from QRL today a little earlier than usual at the moment, i.e. not working 11-13 hours a day. When I saw the first Aurora spots appearing on the DXcluster I called it a day at QRL and went home to join the fun.

It’s been a great opening lasting about 6 hours in total overhere. I was able to do over 100 QSOs. 😎 Also worked a lot of southerly located stations which really needs a very big opening. Normally even with good Auroras you can work as far south as the JOx0 squares, sometimes down to JNx8 as well. But working as far south as Croatia, Austria, Hungary and even Italy is really rare. This time it even reached down to Serbia (KN04) and even Bulgaria (KN13), amazing! 😎 The reflection zone got that far south at the end (around 18z) that I was north of it  (!) meaning I could not hear any signals anymore while UK stations did work down into Croatia and Italy at the same time! Peter, SM2CEW (KP15), did a number of Aurora forward scatter QSOs into the UK which is also very rare! It did not work further “south”, i.e. at Lasse, SM0KAK, around the Stockholm region …

These very southern stations were worked, most of them with me beaming around 80°:

Of course distances are not that big for the QSOs mentioned above, it’s more about their rare nature. You can do much bigger distances into west and east. But even there distances bigger than 1.400 km are something special not happening too often. Keep in mind I’m only running about 600 watts and a single 9 ele LFA Yagi! Of course running a kilowatt or more and a group of 4 antennas or more you can certainly do much better. 😉 I was very happy and excited being called by Serge, RD3FD. Not only was our QSO a great distance but also a new square,  too, #556. And I was his only contact into Germany! 😎 Also the QSO with Andy, RV3IG, in LO17 was quite remarkable …

You can find my full log here. As you can see I concentrated on 2 m. There was simply nothing very interesting to be worked on 6 m and our 4 m special permit sorrily expired a week ago. 🙁 Also nicely visible: just a very small number of SSB contacts! With all the spread understanding voice reflected by Aurora is really difficult. I tried CQing myself on sideband a few times but mostly couldn’t make out the callers … CW rulez! 🙂

This entry was posted in Aurora, Propagation, VHF. Bookmark the permalink.