Six meters opened into North America tonight but once again bad luck overhere. Briefly heard AC4TO with about 419 and K4RX with 529 but couldn’t raise their attention. A pity as both would have been new squares. Always have the impression JO73 is the blackhole during such openings. Seems skip distances are always right to reach G, ON, PA then jumping over our heads and only eastern Europe getting the propagation again. 🙁 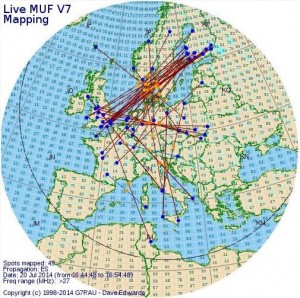 Besides this ES conditions were outstanding during late afternoon and evening (although 2 m did not open). 6 & 4 m have been open until well after midnight local time across Europe. I didn’t do many QSOs as I was mainly looking for new squares (but none found). Picture left shows just 4 m cluster spots mapped for a 10 minute period around 16:50 UTC. Seems a lot of German guys have fun on 4 m now, too. We got a special permit to operate the lower 30 kHz of 4 m, i.e. 70.000 to 70.030 MHz, from July 1st to August 31st 2014. Practically almost all QSOs have to be done using split as the rest of Europe is usually doing their operations around 70.200 MHz. I did not become QRV yet due to the short time frame. Nevertheless a big THANKS to DARC for their persistance to make 4 m happen in DL. They are further working on a permanent permit to use the band in Germany. So hopefully next year we might have more spectrum access and for a longer period, keeping fingers crossed! 😉