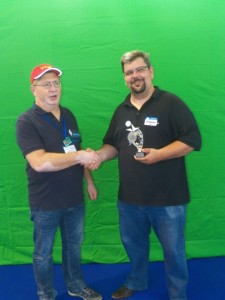 Just back from Friedrichshafen visiting the HAMRADIO fair. Seems I missed all the fun on 6, 4 & 2 m. All three bands have been wide open 3 days in a row and Sandro, DD3SP, reported working lots of QSOs and new (4 m) squares. And of course now having returned it’s all closed. Oh well … but we had fun in Friedrichshafen, too! 😉

Met a lot of guys, old and new friends, shaking lots of hands and feeling proud with all the people knocking on my shoulders while walking over the fleamarket telling me they use one of my gadgets, be it the sequencer, the microphone voicekeyer or even the big FA-SM solution, and how much they like it. Seems the shirt with big callsign letters on the back worked out nicely. 😉

Also nice to be awarded with a small trophy for placing 3rd in 2014’s EUROPA-Diplom Honor Roll. I was not even aware they had trophies for the first places so astonished to receive an email from award manager Georg, DL4SVA, asking if he could hand it over during HAMRADIO. Sure, no problem, Sir! 😉 Intentionally I only put my current figures in to get the Honor Roll sticker for 2014 for the EUROPA-Diplom award. Nice coincidence. 😉

This entry was posted in Awards, General stuff. Bookmark the permalink.