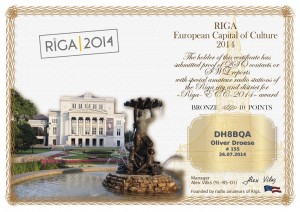 The city of Riga, capital city of Latvia, is the official European Capital of Culture 2014. Therefor Riga radio amateurs founded the award series RIGA – European Capital of Culture – 2014. Three award categories Gold, Silver, Bronze are available and can be obtained by contacting a certain number of special event callsigns starting with YL2014. The guys are quite active so to achieve at least Bronze is not that difficult. The award is issued for free and sent as a PDF file.

Another award received recently, also as a downloadable PDF file, was my WRTC Chase Award, pictured right. It was only issued to those 388 radio amateurs worldwide (41 of them in Germany) that made contact with all 59 teams during WRTC2014 that was held in parallel to the IARU HF Championship in July. The Chase Awards series was certainly a strong motivation to be QRV during IARU-HF myself. It’s been a nice incentive by the organizers, something to keep in mind for the next WRTC in 2018, too. 😉 The German WRTC participants and visitors signed the “Boston declaration” to file an application to the WRTC sanction committee to bring the next WRTC to Germany in 2018, an idea I strongly support. If you are willing to support that idea, too, please sign the declaration online. As it is in German you might want to let Google translate it for you to get the basic meaning although the translation is not the very best. 😉

This entry was posted in Awards, Contesting. Bookmark the permalink.