When thinking about where to spend this year’s family holiday I thought it might be a good idea to combine it with some island activation as it conincided with the yearly IOTA contest last weekend of July. It’s been a few years since I last activated an IOTA reference.

Paul, DL5CW, had been active during July’s IOTA contest from Hjarnø Island, EU-172, for a few years in a row. So the idea arose to do the contest together. I booked one of the wooden huts on the Hjarnø Campsite for the family while Paul booked his usual hut near the campsite’s field as the radio shack. 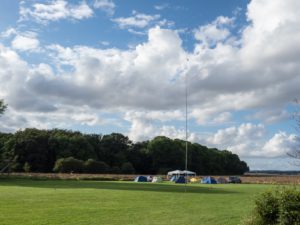 Luckily no interference to the campers. 😉

Arrived with the family Thursday before the contest and Paul joined on Friday. Antenna and station setup didn’t take too long. Paul had prepared everything quite well. We tried out one of the new Arial-51 OCF (off-center fed) dipoles for 80-6 m (Model 807-L) on a DX-Wire 15 m GRP “EXTRA” heavy-duty fiberglass pole. Weather was fine, almost no wind, so work was finished in about 1,5 hours. While the field is usually empty there was a youth group camping this time. The landlord had separated them from the rest of the campers. Obviously they were there for some party time. 😀 Of course our activities attracted their interest so a small group of girls came by after a while to ask what we were doing there. A good chance to explain what amateur radio is all about. They had never heard about it but easily understood it’s the same basics of radio for their mobile phones, too. 😉 An interesting conversation about the island and it’s history evolved, it turned out the family of one of the girls originated from Hjarnø. The whole group met there for party after finishing college and now meet up every year to keep in touch. Nice tradition! 😉 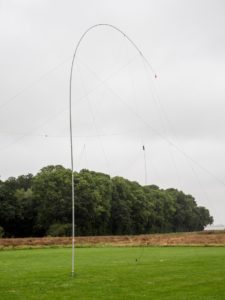 Antenna mast in wind – not good!

Weather changed rapidly on Saturday. Paul started the contest and wondered why QSO rates were so poor after about an hour. See reason on the picture left – antenna ends on the ground and feedpoint not much higher either! 🙁 Although we used 2 sets of guy wires they were probably too far apart so the mast bent dramatically. Luckily we used the HD mast version which probably saved the contest! Can’t imagine a “normal” glassfiber pole would have survived in that wind conditions. So we took it down hastily and reset the guy wires and also lowered the OCF’s balun position a bit to be on the save side. No problems afterwards and rates much better again. 😎

Conditions were quite okay being aware we’re almost in sunspot minimum. 40 & 20 m were the day-time “money bands” with 80 m close to them during the night. Even worked a good share of DX although we were only running 100 watts from an Elecraft K3.

There were a few small Sporadic E openings but activity was not very high thus not too many QSOs made on 15 & 10 m, a real pity! Certainly could have worked much more but as the bands were not very productive we QSY’d down soon again not to miss too much. 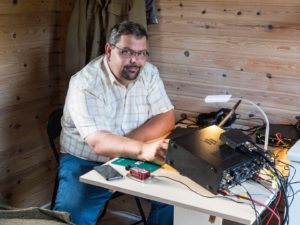 Yours truly checking condx before the contest.

Sunday brought a heavy thunderstorm late morning. It was difficult to still work somebody as the bands were full of static crashes and noise so we probably lost another good number of QSOs. Luckily it got much better after about an hour so we were able to run again.

All in all we’re quite happy with the result. We had expected to do some 1.000+ QSOs and finished with almost 1.300 – not too bad for just a hundred watts and a small wire antenna. 😎 The result will probably not be good enough for one of the leading positions because even in the low power class the competition is using better antennas (and more operators to errect them!) but we sure had lots of fun! Having the XYL cooking was certainly a small plus point, too. 😉

Many thanks to Andrew, OZ1XJ/OZ5E, for lending the short contest call! Made life much easier than operating CEPT style … Of course we do have lots of ideas what could be made better next time and also discussed where to go next year. If only these contests wouldn’t come so “surprisingly soon” all the time. 😉

This entry was posted in Antennas, Contesting, Expeditions. Bookmark the permalink.