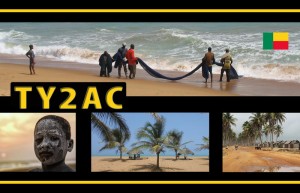 Had the first 6 m ES opening of the season today. The band opened nicely from here into Southern Europe, i.e. 9H & IT9 around 15:30z with S9+ signals. Saw TY2AC spotting southern Europe stations himself on the cluster. He finally settled to call CQ but heard only a few MS reflections once in a while. Stayed tuned to his frequency while doing other things. Around 16z he finally came out of the noise but never strong enough to QSO, just got ??? in return to my calls. It took another quarter of an hour until he rised up to a nice 559 signal, albeit with QSB. Took just one call to work him then. Propagation seemed quite localized, he didn’t get much callers, it was mostly northwestern Poland and northeastern Germany working him with JO61 stations being the most southern (at least as long as I monitored).

Even 4 m opened up later, quite early in the season! 9H6A (guest op’d by PB8DX) was very strong on SSB for more than half an hour. 9H1PI CQing on CW was much weaker.

It’s a pity 4 m is still not allowed again in Germany yet. Hope RegTP will offer a temporary permit for this summer again anytime soon!