VHF condx around the turn of the year 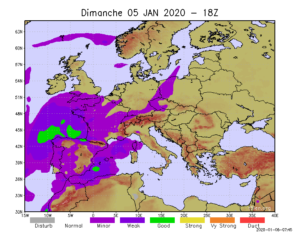 There were some great tropo openings between 28th December and 5th January, just not here. 🙁 😉 Besides the usual path between EA and G it also opened between EA and PA/ON + West-DL, then extended up to OZ/SM6 and even SM0, wow! Also the 3000+ km path between the UK and the Canaries opened. There was even some very rare winter Sporadic-E on 2 m on the 28th! There must have been some lucky guys … 😉 I only heard (or more precisely saw) G3YYD for 2 periods on FT8 on the 28th but that might as well have been some MS enhancements. Although condx were still far away from JO73 I had some more luck today and could work 2 QSOs at least. QSB was deep and condx not stable and I’m not sure how it worked at all looking at the tropo forecast but it showed once more you just have to be there and sometimes miracles happen. 😉