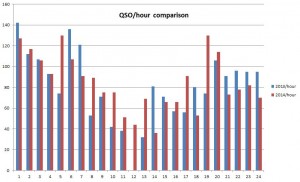 The Worked All Germany Contest 2014 is history now. After doing 1.923 QSOs last year with superb conditions but only keeping my butt 23 hours in the chair the goal for this year was to finally break the 2.000 QSO mark from our medium sized station and make it through the whole 24 hours, of course. I managed the latter but to be honest it was really difficult. I was not well prepared, i.e. not enough sleep the days before, too much QRL, a.s.o. I really had some senior moments especially Sunday morning when rates were low and microsleep caught me a few times. Sleep depriviation did not help with my not too good CW, too, so please excuse me for all the repeats needed. My mind simply switched of at times after receiving the first 2 or 3 letters of a caller. 😉 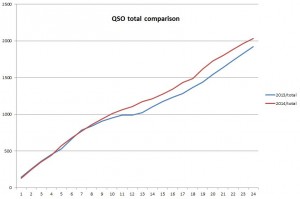 So what about the other goal? Yes, I knocked down the 2.000. But this as well was real hard work as condx were much much worse then last year. An X-flare just before the contest was going to wipe out condx. Especially Sunday was really bad. 10 m stayed closed overhere until almost noon and even then only allowing QSOs up to UA9 and the more southern path’. Backscatter was bad, too, but got better again in the afternoon. Also North America opened again during the last contest hour on 10 m but only for the big guns and no high rates possible. Saturday was a lot better but even with a good 10 m opening right at the start of the contest it did not produce the same rates like last year. So I quickly QSYed down into the other bands.

As can be seen from the charts left and right (click them to enlarge) I lost a few QSOs at the beginning compared to last year. I made up for it later on and at times was ahead 185 QSOs (spent more time on 40 m working nice DL pileups). But the bad condx on Sunday let that edge shrink hour after hour. 🙁

Bad condx also meant bad points average as less DX was worked. I couldn’t get anything going on 20 m SSB at all. In general it was much more fun on CW so I might change over to the CW-only class next year instead of Mixed. 😉

Having my goal of breaking the 2.000 QSO mark I did not pay any attention to multipliers, just worked what came across. Yes, that’s not the right strategy for a high total score but this was not what I was aiming for this time. 😉 For scoring high you need a high QSO total as well as a high multiplier total. Both together will only work with SO2R techniques … something left to try in the future. 😉

After all the new antenna setup (see below) surely helped a bit at least against the bad conditions. Here’s the score summary …

Believe it or not but I slept a continous 15 hours after being home again and having been awake for 36 hours. Seems my body was in demand … 😉 See you all in WWDX-SSB next weekend!