As the YL was working weekend shifts in QRL I had some more spare time than usual this weekend. 😉 Decided to spend the time in the shack and finally start working on a new project idea I’ve been thinking about for a few month’ already. Whenever I drive those 700 km between JO30 and JO73 back and forth to visit my mom and do some contests from our contest station up there I have plenty of time to think stuff through. Most of my project ideas really come to maturity on the German highways. 😀 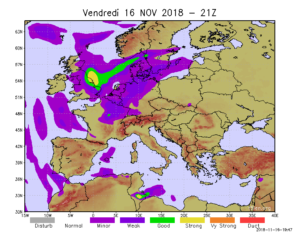 Already Thursday morning when driving to QRL the weather forecast reported about foggy mornings in the valleys and considerably higher temperatures on the mountains. That immediately caught my attentation! If that wasn’t calling for a temperature inversion I would not know what else … there was to be Tropo in the air! Checking the F5LEN tropo forecast it backed my assumption, see right side prediction map for Friday evening. So immediately when back from QRL Friday evening I switched on the remote. Nothing to be heard in JO73 yet but already plenty of contacts in the western part of Europe. You would expect that from the predictions, right? The eastern costline stations in the United Kingdom were already busy working into Scandinavia …

I started working on my project, i.e. drawing a double-sided PCB (which actually took a few hours over the whole weekend). I will not release too many details yet, just teasing my readers a bit. 😉 But it will probably be something handy and supportive if using Icom radios … ’nuff said. 😀

Around 21z the band started to open over here, too. G4KUX was producing splendid signals but he was the only one. It seemed it was only open to IO94, very localized. A little later I caught M1GSM (also from IO94) on SSB, he was running just 30 watts into a small 5 ele Yagi, great contact! At the same time G4KUX started working up deep into Finland at distances > 1.800 km, amazing! Later on propagation shifted a little north bringing three GMs into the log, all located directly at the Northumberland coast line in south-east Scotland. And all weak enough that only FT8 worked. Nice to catch Jim, GM4FVM, again, he’s got a nice blog, too. Kept watching the game but no more new stations to be worked, it was much better further west and north, seems I was just at the very edge.

Saturday morning I could still hear (although “see” might be the better term with FT8, hi) some of the same guys of Friday evening, i.e. G4KUX and MM3LSO, but didn’t call them again. Instead I caught some long distance QSOs eastwards which was unexpected, nice surprise! G4CDN to the west was some nice DX, too, but I can work Richard basically daily if conditions are not too bad. 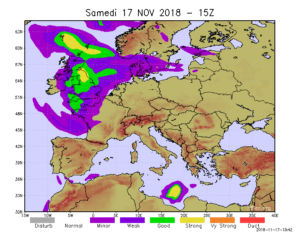 I also faintly heard the Faröer beacon OY6BEC/B from IP62mb over 1.588 km! But it was not more than a 319 report at best. The band went dead after 11:30z over here, only locals to be heard anymore.

I kept an eye on the radio while carrying on the project work. Around 16z I started hearing the OY6BEC/B Faröer beacon again, now with a solid 529. And lo and behold there were stations QRV on Faröer! OY1OF from IP62 was reported working into Europe on FM with a vertical. Unfortunately nothing over here. Later on he switched over to SSB but still nothing. The 20 dB cross-polarity loss between horizontal and vertical polarization prevented it. Damn!

In the course of the evening I could do a few more DX contacts. It was great to hear the voice of Chris, GM3WOJ, again! We’ve been working each other every now and then over the years during a number of VHF openings, be it via Tropo, Sporadic-E or Aurora. He’s also a great DXpeditioner on HF …

The Faröer beacon was peaking 549 around 19z but then started to vanish quickly and not heard after 20z anymore. A real pity as later on OY1R from IP61 was QRV in SSB, too, albeit with just 50 watts and a vertical. He was even worked from JO63 (DJ4TC) & JO64 (DG0KW)! DJ4TC is just 60 km away from me but while he worked him I coud neither hear OY1R nor OY6BEC/B, all propagation gone. OY4TN from IP62 was reported on FT8 around 20z in JO64 (about 100 km north of me), too, but no copy either. Seems it was not my turn with OY this time … 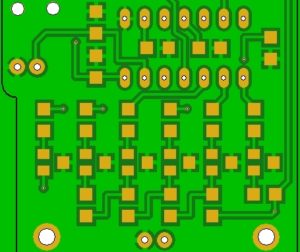 No VHF-DX on Sunday here so I could concentrate on finishing the PCB work, writing down the project BOM (bill of materials) and order both, parts not in my junk box as well as 2 prototype PCBs. They will arrive in 2 weeks. Let’s see when I can find some time to assemble the first prototype then, hopefully before Christmas. 😉 Also need to do some PIC programming before it all works together. 😎 For next weekend I’ll have another of these 700 km trips. I’m sure there will be some more ideas on the road again … 😉