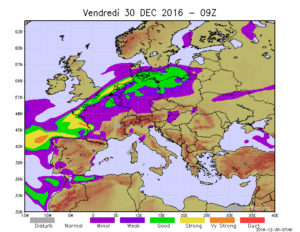 Coming back from a Christmas trip to JO73 yesterday, December 29, driving westwards to Cologne (JO30) we enjoyed a very nice sunset. Sky was crystal blue, sun was shining and turning everything into dark when setting with a slight flicker around the horizon. As a VHF guy you know what it looks like: atmospheric inversions! 😎 Checking the F5LEN tropo forecast after arriving later that evening it showed some tropo predictions from west to east and confirmed my gut feeling. A quick phone call to Sandro, DD3SP, revealed that there was not much to be worked, at least in JO72. After spending the evening with the family in my girlfriend’s place I went to my home this morning to see if propagation was more favourable for us now. Switching on my remote station back in JO73CE I heard good old VHF friend Dave, G7RAU, right away. After a quick hello a few more nice DX contacts followed during the day:

Interestingly Dave was the only station that I could hear all day long. All other’s were in for half an hour or so max before they vanished again. Furthermore it seems that I was at the southern end of the duct. Sandro in JO72 could only work Dave but no other DX. On the other hand further north, i.e. with Klaus, DGØKW, and Charly, DF5VAE, both in JO64, and especially southern Sweden (SM7) there was even more DX to be worked. Charly also managed to work quite a number of DX stations on 70 & 23 cm! Strange: F8IQS was calling CQ way down in the band, i.e. on 144.197 MHz. Only found him after seeing a cluster spot of another guy working him. He stayed there all the time which is quite unusual for somebody wanting to work DX. 😉 Hope that all the spots helped to get him a few more QSOs into the log …

Here are a few audio snippets again, hope you enjoy listening to them! It’s always a nice “reminder” to listen to later again. 😉