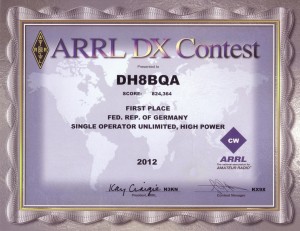 It does not feel that long ago since I wrote about 2014’s ARRL-DX-CW contest in this blog. Another year is gone … wow, time’s really flying by! So I practised my poor CW again last weekend. 😉

Had a good night’s sleep Friday to Saturday. With lots of heavy QRL during the whole week I was not in the mood to start the contest right away at 0z. But I set the alarm clock to 4z to at least take advantage of the greyline propagation on the low bands. And boy, condx were really great! Made some 60 QSOs into North America in just one hour on 80 m! This is what I usually work during a whole contest on that band – if I’m lucky! 40 m was great, too, propagation even reached to the West Coast and a few AZ & CA guys were really loud. Went back to bed at 8z.

At the station again at 10:30z to work the high bands. Did about 98% only S&P or rather C&P (click & pounce) 😉 on Saturday and concentrated on collecting all the juicy mults, i.e. US states and Canadian provinces. Condx on the upper bands were not really good, only made some 130 QSOs on 10 m on Saturday. The band opened just very selectively. Back to bed at 20:30z with 675 QSOs on the first day.

Got up at 0:30z Sunday morning for another low band session. Condx not as good as the day before anymore but still quite nice and lots of folks to work, good activity! Would not have thought it would ever be possible to work over 500 low band QSOs into North America in one single contest! Might be low figures for others but big score for me … just using low dipoles overhere (80 m dipole Inv-V at 16 m height, 40 m Inv-V @ 14 m) that have a high elevation angle and are rather suited for NVIS than for DX. 😉 Back to bed at 7:30z.

Into the game again for the “final spurt” at 11:15z. High band condx much better now! Had some great fun running on 10 m Sunday afternoon. Even worked a few West Coast guys although I cannot compete with the guys in Southern and Western Germany on that matter. Yes, location matters! 😉 Went down to 15 m after 10 m had dried out at 18z and had lots of fun there, too. Fantastic signals from the West Coast, maybe I should have changed bands an hour earlier already. Whole Sunday about 85% run operation. Down to 20 m after 15 m had died (20z) and could still run there until 22:30z. Would not have expected that. Another short C&P session through the bandmap before QSYing down to 40 m for the last 2 hours with an occasional QSO on 80 m in-between. Rate dropped a lot so was short of quitting. But kept my butt in the chair until the end using small motivation techniques, i.e. setting reachable goals like working a full 300 Q’s on 40 m (was at 290 then with rate near zero), then 310 afterwards … or 1.650 Q’s in total, then 1.666 Q’s for a nice number, a.s.o. 😉

All in all lots of fun and an enjoyable time. Sure with a little less sleep and also some running on Saturday 2.000 QSOs would have been in reach. Also some optimization potential concerning breaks. After all it does not matter as much on CW as on SSB if you’re eating pizza while operating radio, does it? 🙂 And sometime we *really* have to install some DX-optimized low band antennas …

This entry was posted in Antennas, Contesting, DX. Bookmark the permalink.