ARRL-DX-SSB – quite a fun weekend!

Just returned from my 2 x 700 km roundtrip to the contest station. Have been active in the ARRL-DX-SSB contest as planned. Here’s my report …

Saturday
As condx were terrible on Friday I was not sure if it would be a good choice to start 10 m single band. I really am a 10 m addict but my last ARRL-DX-SSB in 2012 was a disaster due to really bad propagation. So to be on the save side I decided to start all bands first and decide later to switch to 10 m single band if conditions would be good enough. Checking the low bands I found condx still suffering from the flare. 160 m was no good at all during the first night, did not hear a single signal from NA. 80 m was a little better but even there signals were weaker than what I am used to. 40 m did not suffer that much so I had some nice runs there although not lasting too long. Was done with 80 & 40 m after 5 h, 174 QSOs in the log and no new ones to work so decided to get some sleep then. Note to myself: We need to install some better lowband antennas one day. 😉 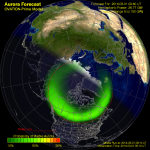 Did not sleep well so got up after 3 h again to check the bands. 20 m was open a little bit so I managed to work about 40 QSOs in 2 hours. Not that much but only big guns were audible. In-between I was chasing some DX on 10 m which was open very nicely to the south & east already so looked very promising for the NA afternoon. While scanning ten I stumbled across VE8EV in NWT who was 55 with the antenna’s backside. Wow! Turning the yagi over the North pole he went up to a solid 59. Wow again! Easily worked him at 9:11z, very unusual time! Certainly some kind of Aurora-E as it was deep in the night overthere and Aurora still going on. Quickly grabbed a picture of the Aurora oval for later analysis (see left side). Sorrily VE8EV was the only SSB station audible from across the pond, another sign for Aurora-E which is a kind of Sporadic-E triggered by Auroral ionization thus sometimes very localized. Found WL7E pounding in on CW with 599+20. Wow again! Worked him, too, and decided this must be a good omen for 10m. 😉 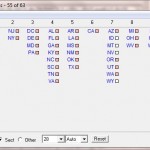 About 10:45z 15 m opened up so I spent some 1,5 h there. Rate was not very high so just 75 QSOs worked. Always kept an eye on 10 m with the K3’s second RX and found VE9AA as the band opener 😉 again at 11:10z as well as K1LZ & W2PV. Nothing else yet so stayed on 15 m. QSY’ed to 10 m around 12z after the band sounded more lively. About half an hour S&P only before signals finally got strong enough to do some running. Could hold my frequency down around 28.3 MHz for about 2 hours until it got too crowded and rate suffered massively from the QRM. 🙁 QSY’ed to 28.7 MHz but couldn’t get the rate higher than 80/h so back to S&P and grabbing some more multipliers. Around 17:30z I finally found a good spot for running again lower in the band. Rate went up magically. Band closed around 19:30z overhere with almost 600 QSOs on 10 m in the log and 55 mults worked. QSY’ed down to 15 m and did a nice 130 hour there. Then down to 20 m for a slow hour with just 50 QSOs before that band closed, too. 1.100 QSOs in total for the first day with emphazise on 10 m.

Sunday
As I had decided to make it a 10 m single band entry now I skipped the second night completely and got a few nice hours of sleep. 🙂 Checked condx around 2:30z when mother nature was calling but did just one QSO on 40 m. Nothing on 160 m except VY2ZM just above the noise so didn’t even call him and went back to bed. Back to the station at 6:30z for a handful of QSOs on 40 m and later on 20 m. Felt good not to be in a hurry until 10 m was going to open.

Met Tom, DK3EE, who was operating DK3T, on 10 m in the late morning. He told me he had already made 1.100 QSOs during the first day on 10 m. Ouch! I thought my 600 QSOs were not too bad but that really put me down. 🙁 I knew I couldn’t catch up with him anymore as he has more power, more antennas and a big advantage due to his QTH 500 km more west, i.e. he can work the band about an hour longer in the evening than us in the North-East. When the band started to open I spent the first half hour listening to him and could barely hear what he worked. Ouch again! Asked Sandro, DD3SP, living about 100 km south from me, to listen to Tom, too, and he could at least hear 1/3 of his QSOs, still much much more than I could hear although I have about 3 dB more antenna gain than Sandro, all else being equal (we both run K3’s and antennas are about 18 m high). So it’s all about location, location, location. Maybe I should search for a new QTH in southern Germany. 😉 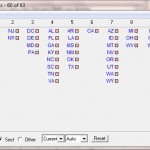 As I could not win 10 m anymore I decided to switch on the cluster  (although that put me in the Unlimited category) and at least try to work the remaining missing mults for a full sweep on 10 m (and I did manage all US mults, see left). Turned out it would not have been neccessary as in the end *all* mults where calling me while running, even another VE8 in NWT and a VY2 in PEI (besides VY2ZM who is a save mult for PEI but didn’t call me, I had to call him, hi). This time I could even hold my run frequency low in the band quite well although QRM was really bad at times. So I did 6,5 hours of continous running to add another 750 QSOs to the log. At 19z the band dried out and only the big(gest) guns where still audible. Added a few ones not worked yet and already wanted to call it a day but then decided to let the voicekeyer run for another few minutes. N9UA called in although we had worked before just to tell me I was the only European he could hear on the band and I was 59+20. Wow! This is what I like about 10 m (and 6 m for that matter), you never know what will happen. So I quickly made another 40 QSOs in 20 minutes (almost exclusively east coast now) before the band really closed at 20:15z, 45 minutes later than on Saturday.

Condx on 10 m were okay on Saturday (not much west coast here, just 3 x CA wkd and ID, MT, NV and WY mults still missing) and much better on Sunday (65 x CA for comparison). Almost 1.400 QSOs on 10 m in total is not too bad for my equipment and location but I felt I could have done much better if I could have hold my run frequency low in the band on Saturday and would have done less S&P as all mults finally called me. But hey, you never know before if this is going to happen. 😉 So after all maybe 1.600 would have been possible. DK3T managed well over 2.100 QSOs on 10 m. Oh well … did I mention his location advantage already? 🙁

Conclusion
You can’t win 10 m from Germany’s north-east. You (or me for that matter, hi) should decide *before* the contest what category fits best and then stick to it. Doing the second night full-time and paying more attention to 20 & 15 m might certainly have yielded another 3-400 QSOs. I feel +/- 2.500 QSOs is the station’s and location’s (and OP’s?) limit for an ARRL-DX-SSB without SO2R. And we need to install some lowband RX antennas one day. 😉 Score summary:

Was lots of fun, that’s for sure! Now looking forward to the Russian DX contest in 2 weeks. Hope to hear YOU.

This entry was posted in Antennas, Contesting, Equipment, Propagation. Bookmark the permalink.