Contest started local Friday evening 18 o’clock which is a nice time compared to in the middle of the night at 1 or 2 o’clock local in Europe. 😉 Decided to go for a serious 20 m single band entry as 15 & 10 m would probably be (rather) dead and 20 m is the only remaining contest band with a gain antenna here even if it’s just a Cushcraft X7. 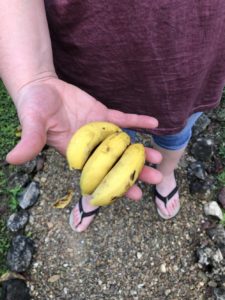 Contest nutrition from Monika’s garden. Thanks to my XYL Frauke for keeping me fed during the weekend. 😎

The band was well open for about 1.5 hours before it faded. From my CQ-WPX-RTTY contest experience as P4ØFA on Aruba a few years ago I did expect big(ger) pileups down here, too, but really struggled decoding the signals. I couldn’t get the rate over 50 QSOs which is just about half of what is achievable on a single radio with a pileup going on. It soon dawned on me that there might be problem somewhere. I had tested the station Friday morning and did a few RTTY QSOs, too, but it now felt like something was wrong. After about half an hour I decided to switch on the internal RTTY decoder of the IC-7300 and et voila, it could read the signals not decodeable on the PC?! Oh boy … 🙁 So not to waste time I decided to use the radio itself for decoding and typing in all the QSO info manually into the log as long as the band would be open and take a closer look into the problem afterwards. Well, it turned out to be a problem with the soundcard built into the microHAM microKEYER II! 🙁 The station got a serious hit from lightning a few month’ ago and while it seemed the MKII did survive it it now turned out it got damaged partly, too. Not that the soundcard would not work at all but audio quality was seriously degraded. Luckily the IC-7300 has a built-in USB soundcard, too, and after reconfiguring the station to use that one instead and the MKII only for FSK keying I was back in business with excellent decoding abilities now. 😎

Condx were quite okay on Saturday with exactly 1.000 QSOs before the band closed. So I hoped to finish somewhere around 1.800 QSOs +/- but condx deteriorated a lot and Sunday was much worse with lots of QSB and many repeats needed. Thus the 500 QSOs on day 2 were even harder work …

Anyway, here’s my V37DX result and I’m eager to learn what it will be good for. 😉

Inbetween the 20 m band openings and before taking a rest and to confirm the station now worked okay again I did a few QSOs on 80 & 40 m as V31FO, too, and handed out some points. I was very positively surprised about the 80 m performance although it’s just a dipole about 13 m high but in the middle of the jungle it seems to hear quite well! So might give Eighty a few more trys during the next days, too.

Here’s the small V31FO result to complete the statistics: 😉

This entry was posted in Contesting, DX, Expeditions. Bookmark the permalink.