I have been a user of the Elecraft K3 for about 5 years now and really like the radio, UI, performance, etc. Never had a radio for such a long time (except my little “Swiss knife”, the Yaesu FT-817), usually swapped every 2-3 years to try out something new. Obviously Elecraft did something right. 😉 For my remote station I had been using an ICOM IC-706MkIIG and later an IC-7100 (as well as an Elecraft KPA500 amplifier) with their front panels separated through the internet using the Microbit Remoterig boxes (first user in DL). I could never imagine to run a radio without a front panel in front of me (been there done that) so I accepted the performance drawbacks when doing remote just for “the feel of it”. So it was good to see Elecraft announcing the K3/0 “remote head” to use a K3 in the same way like the Icoms thru Remoterig. But the big form factor of the K3/0 (it’s just an empty K3 thus the same size) was never appealing to me, it is simply too big for my small desk here at home. 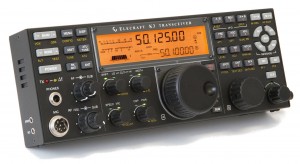 Luckily Elecraft thought it over and developed the K3/0 mini which is just the front plate in a small enclosure. So I finally bit the bullet and bought a second dedicated K3 for my remote setup plus a K3/0 mini. Yes, it is quite an investment but this way I will have a very good setup that is even usable for contests remotely (which the Icoms sure were not!). I will also rebuild the remote antennas for VHF and make access to all the other antennas and rotators for HF we have overthere at our contest QTH, so will be QRV on all bands rather than just 10 – 2 m as it is the case right now. Quite some work waiting, will try to realize everything during my 2 weeks holidays in 2 weeks when I will be back in JO73 for (hopefully) some VHF Sporadic E, too. 😉

Built up the whole system here in Cologne yesterday to try it out and configure everything and also made all the needed cables. It’s been a while since I last heated up the soldering iron (yes, too much work and other priorities) but boy, it’s been good to smell some solder smoke again. 😉

This entry was posted in Equipment. Bookmark the permalink.