Well, yesterday I finally had the first situation with the OVF indicator making it onto the display – frontend ADC overflow! I was wondering why I got it on 6 m and first suspected some strong ES opening with TV/broadcast station from Russia but the band was pretty much closed into that direction! Only when switching the scope to a broader range I recognized a really strong signal on the 6 m FT8 frequency, i.e. 50.313 MHz, and guess who it was? Uwe, DL3BQA, from our second shack just across the wall. 😉 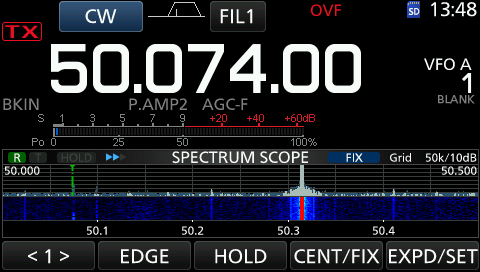 He was transmitting on our new 6 m DX beam which is about 60 m away from my 6/4 m duoband yagi I had connected. While the OVF indicator showed up my RX was desensed by about 25-30 dB, i.e. listening to the SV3 beacon it went from an s7 signal down to about s2/3 but that was all, receiption itself was not affected, no noise, no nothing. Of course the desensing is bad enough but other radios would also make lots of strange noise in that situation! So first I was rather impressed in that moment. 😉

BTW: The 7300 offers 3 different spectrum scope ranges per band (segment) so you can even monitor a smaller different range than you’re actually tuned to as long as it is within 1 MHz. Quite handy for monitoring purposes! In the example below I was tuned to a CW beacon in the lower part of the band while watching the spectrum in the digital section … 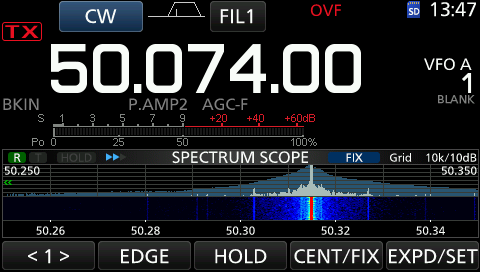 Would be interesting to see how the K3 would cope with this exact situation, especially with a P3 connected. It would probably generate some more noise (but maybe not as much as the desensing). We’ve had those situations already but than being no more than 50 kHz away from each other so not comparable to the almost 250 kHz spacing we now had. But to be honest I’m just too lazy to unpack the K3 for just that test. 😉 Guess we’ll see when I’m running the remote to monitor the band while Uwe is doing FT8 again … will be happy to report back then. 😉

This entry was posted in Equipment. Bookmark the permalink.