Another CQ WPX CW is in the books! As usual I decided to do a 10 m single band operation. I just like the band, especially in sunspot minimum it offers a variety of propagation modes most people are not aware of. But that’s the big problem, too: too little activity even if there are good band openings, if they’re not lasting long enough to stir general activity …

Two years ago I was really lucky with ES conditions almost all weekend long doing over 850 QSOs leisurely on the remote and even broke the current German record by coincidence. 😎 Last year was a rather bad year propagation-wise and guess what? This year wasn’t much better either … but let’s look at it chronologically. 😉

Got up early Saturday morning, i.e. before 4z already. Ten was closed so I took a look on 20 m and the band was quite well open to the US West Coast as well as the Pacific, all direct path! Splendid signals from Hawaii which is usually a rather difficult path almost directly over the North Pole from here. But not so this time, loud signals and no “polar flutter” as is often the case, just clear strong signals like these two:

Worked two dozen QSOs then went to bed again for another hour. By 6:30z 10 m opened via Sporadic-E into the Mediterranean and the Balkans. Good old friend Guiseppe, IT9VDQ, made it into the log as my first 10 m contact. Seems he had a great time as SOSB10, too, as he reported on the 3830Scores website. Calling CQ brought a call by Tom, HZ1FI, for my first DX contact, too. 😎

An hour later the band was well open into different directions with very strong signals at times but activity was quite low, a real pity. Biggest signal peaking about 60 dB above the noise (not to mix up with 599+60, hi … 60 dB above noise is about 599+10) was still IT9VDQ (the red one in the middle): 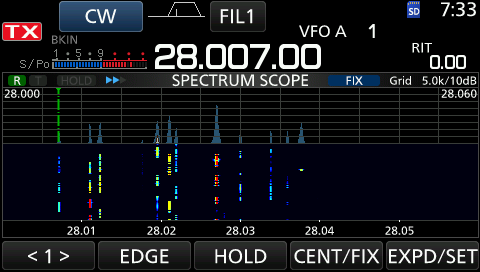 Speaking of big signals please take a look at the following two screenshots. The left one shows the really wide signal of OH5Z around 7z while the right one shows the much cleaner signal of OG55W. Both were about equal signal strength, i.e. s9 plus a bit indicated by the red colored carrier lines (this was important to have a clean base for comparison not to draw any wrong or unfair conclusions). 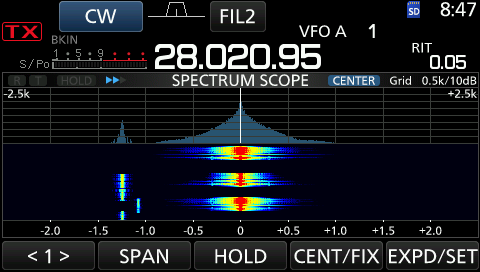 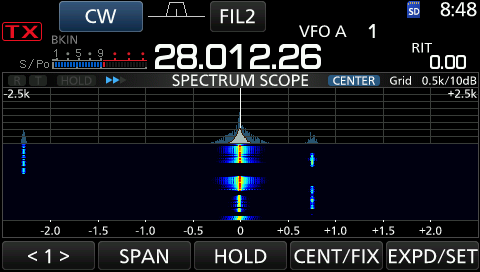 It goes without saying that taking up 2 kHz bandwidth with one (!) single CW signal is way beyond good sportsmanship. 🙁 Most of his “sidebands” were generated from bad keyclicks (which is not that obvious from the picture). EDIT: Meanwhile the OH5Z guys contacted me and apologized, see here. 🙂

At 10:20z SP4Z spotted AH2R, Guam in the Pacific, as being “strong” from almost 12.000 km away from here! And lo and behold, I could really hear him, too! Unfortunately he was too weak for a QSO, i.e. he didn’t hear me, but then it was still quite fascinating and showing again the magic of 10 m (although 6 m is the official “Magic Band”, hi).

I’m not sure what kind of propagation it really was. The normal F2 path does not exist with current sun conditions. Maybe it was really a 5 or 6 hop ES which would be supported by the strong signal produced about 400 km eastwards while I just got into it through scatter for the “last few” kilometers. That many hops aligning perfectly “as needed” is nothing to be expected daily but not impossible at all, we’ve even seen that from DL to VK on 6 m in the past! But maybe there’s a kind of E-layer tunneling involved, too, as supposed by some Japanese guys trying to explain the regular 6 m openings between JA and Europe during the summer month’ … 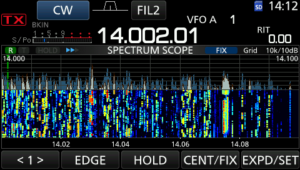 Ten closed down around 12z, not a single signal anymore and even no locals answering my CQs. Handed out a few points on 15 m were the US East Coast was easily reachable by sidescatter propagation beaming to the Caribbean. Then onto 20 m were stations were wall to wall from 14.000 to about 14.120 MHz as can be seen on the righthand screenshot. The wide line around 14.074 MHz is the FT8 digital mode frequency showing how big most signals are. I’m not sure if honorable Joe Taylor, K1JT, really intedend that digital mode for communication when signals are way above s5 up to s9+. After all it’s a weak signal mode, isn’t it? But I might comment on FT8 in a separate post later, I’m trying it out, too, and still making up my mind about it. 😉

Back to the contest: 10 m opened again around 14:45z, this time into the Canaries. It took another 20 minutes until we had a link into South America. 🙂 A number of juicy 3-pointers made it into the log as well as a nice number of new prefix multipliers. 😎 Around 16z propagation shifted a bit northwards to the Caribbean with NP4Z making it into the log as well as YW4D. The band was good for quite a while into the Iberian Peninsula with an occasional call every now and then by a few more South Americans. We also had a good ES opening into the U.K. with some nice strong signals but then again, activity was sorrily much too low. E-Clouds were ionized so strongly between 17:30 and 19:00z I could even work a good number of backscatter contacts to DL, PA, ON, etc. providing more mults. Good old friend Dave, G7RAU, of VHF fame, called in at 18:33z. I liked his clusterspot afterwards a lot! 😎 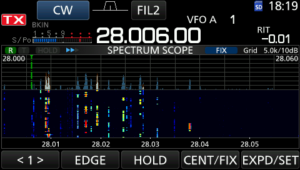 It shows how well the path westwards (at least the first hop) was open which also enabled QSOs with 8P5A and FM5BH as additional unexpected Caribbean DX contacts. 🙂 The lefthand screenshot shows band activity around 18:20z. It’s not that much about the number of signals but signal strength’ (from blue = weak over yellow to red = very strong). The band closed at 20:30z with both EA1AER and EA5AER coincidentally worked “in a row” (well, actually 10 minutes apart) as the last two stations on Saturday. 😉 My 10 m log counter showed 270 QSOs, not too bad for the first day with such low activity on the band and long phases of no propagation. Did a few more QSOs on the lower bands before I finally called it a day around local midnight. 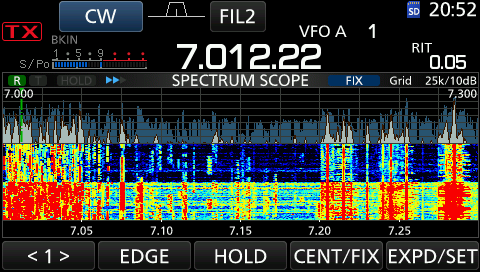 Switchting on the 20 dB attenuator (center of waterfall) helps every transceiver on 40 m, not just the IC-7300. 😉

). Overall the morning was rather unspectacular, only 50 QSOs until the band closed again at 12z (Déjà vu from Saturday, eh?).

It only opened once more at 16:30z. Probably nobody expected another opening with these poor conditions so activity was extra low, what a shame. 🙁 Worked a few EAs and Fs and then got called by K9RX at 17:35z. Gosh! 😎 Quickly exchanged report and serials (hope he got it all correct, too) and he was gone again. Suspect it was a 3-hop E-skip with a Meteor extension for the last 4th hop down to South Carolina or somewhere in between. At least it sounded very much like an MS burst … and really pumped some adrenalin through my venes. 😀 I was even spotted by the WZ7I East Coast skimmer later on (see screenshot up right) but unfortunately no more NA contacts were made (nobody called and nobody heard). 🙁

The later the evening the better the DX was certainly true for Sunday night. Until local midnight a few more DX stations from PY, LU & CE as well as PZ5XX, YV4ABR, HK3C, HC2GRC and P4/W1XP made it into the log with a few more heard (but worked on Saturday already). 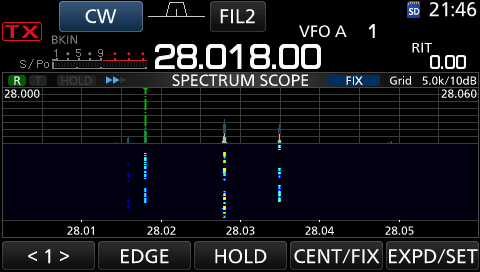 L-t-r: YV4ABR; me (green marker = my frequency) having just worked G4CXQ for the second last QSO; FM5BH & YW4D, both still strong around local midnight before the band finally faded.

PZ5XX just before midnight on 10 m:

YW4D just before midnight on 10 m:

With 358 valid QSOs I finished the contest on 10 m after the last few signals had vanished around midnight, too. I was quite exhausted (listening to white noise for hours *IS* exhausting!) but still had the urge for some adrenalin from high rates so decided to have a go as “fresh meat” on 80 & 40 m until the end of the contest. Doing 230 QSOs in a bit over 1,5 hours was indeed pushing the adrenalin! 😎 So much I couldn’t sleep immediately when I finally went to bed around 3 o’clock local after listening to 20 m ragchews from the U.S., the band was still wide open! Maybe I should have run these last two hours on 20 m … 😉

So how did I like the IC-7300’s performance? Well, it played quite well! Of course there are things I’m missing compared to the K3, i.e. the dedicated 2nd VFO knob to tune in a multiplier already while transmitting then just switching VFOs to grab it and back to running. I also had the feeling the K3 would do a little better on 80 m than the 7300 (didn’t test 160 m). The latter just “felt” a bit more noisy but then we had terrible thunder crashes all over Europe on Sunday, too (which even made it difficult on 10 m at times to copy weak callers). And there were 2 or 3 situations were selectivity of the K3 with direct adjacent strong signals present would have been the clear winner. But then we’re comparing an 1200 EUR radio vs. a 4000 EUR radio, i.e. apples to oranges, don’t we? 😉

The dedicated hardware buttons for certain functions on the K3 might make it easier in the one or other situation, too, although the touch screen makes up for the little front panel real estate of the 7300 quite well with important functions reachable on a simple screen press, too. After all this is just a matter of taste … I really liked the spectrum display of the 7300, it helped jumping directly onto new signals popping up. The K3 combined with a P3 can do the same but then it’s more hardware, more cabling, more hassle & more space (the reason I sold my P3 … I have to install the station from scratch everytime I want to play radio locally here). And more money, of course (the P3 adds another 800 EUR to the K3)! So I wish Elecraft would come out with a “K4” which has all the P3 functionality included. Really.

So all in all the IC-7300 is great value for the money, absolutely! You have to be careful in a multi-transmitter environment but you have to be with most radios anyway. I had the OVF flashing once on 10 m while Uwe was transmitting on 6 m but soon recognized I had forgotten to switch in the 10 m band pass filter. 😉

Would I sell the K3 and just keep the IC-7300? No, not at all. I like the K3 a lot although it has it’s (very few) downsides, too (like every piece of electronics nowadays anyway). But I’m very well used to it, it has the 2nd RX, great ergonomics, low weight (which was a benefit during my recent Caribbean trip, too), is to a certain extend self-serviceable, a.s.o. Would I buy the IC-7300 again? Yes, definitely. It makes a really good allround radio with some great features and is contest-able, too. And, it has 4 m included. 😎