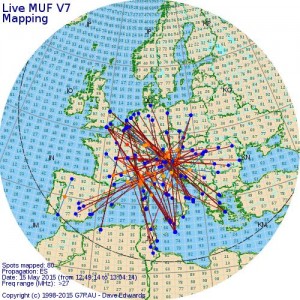 What an interesting day! Just worked two OH1’s on MS for a new country and square before leaving for QRL in the morning. So could only watch all the fun on the cluster and DXMaps website. Seems 6 & 4 m were wide open the whole day. When I finally had the chance to escape QRL early afternoon the 4 m band was still wide open, see map (it only shows spots with MUF > 70 MHz for the last 15 min … that’s 80 spots alone!). From here it was open to Malta still and the 9H’s were producing some endstop signals at times. Unfortunately it was very selective so “just” that path open. Nevertheless fun to listen to the guys down there for almost 2 hours. 9H1GB was only running 4 watts into a 5 ele Yagi and peaked s9 several times! That’s the joy of Sporadic E, even small signals will sound like big guns if the skip is right! And sure Malta is an ES hotspot. 😉

After sigs getting stronger and stronger (9H1BT being s9+40!) it was time to check 2 m. It took no more than a few minutes after QSYing and putting out a few CQs until the band opened. Worked IT9ZVL with marginal signals and much QSB. He was only in for 40 seconds but still enough to complete the QSO. 😎

Nothing else here, seems it was much better further north and west. Anyway, good to catch the first 2 m ES from here and sure hope it’s a good omen for the upcoming season. After last year’s desaster we could all use some nice long openings this year, don’t we? 😉

Later on 4 m propagation switched more westerly which allowed me to work EA6 for another new country on 70 MHz. 🙂 But it took almost 20 minutes until I could finally raise the attention of Gabriel, EA6VQ, and complete a CW contact although he was up to s7 most of the time! Wonder if he’s got an RX problem …

So not too many QSOs today, seems it was rather a quality than a quantity afternoon. 😉