Arrived at the station early this afternoon. Brought the IC-7300 along for WPX-CW this weekend as well as (hopefully!) some fun on 4 m during the next few days (a week of holidays next week). Second radio I took with me is my old Kenwood TS-660 which has been in storage for the last few years. It’s kind of a collection item, took me a few years to find one in good condition and finally bought it from someone in Italy around 2011/12 if memory serves me well. It’s one of the few “special” transceivers produced during the early 80ies that served the (back then) big market of Japanese Novice licensees with providing QRP power level (10 W) access to 15, 12, 10 & 6 m. There was a TS-670 (based on the TS-430) with 40, 15, 10 & 6 m, too, but I liked the design of the ‘660 (based on the TS-130) much better. I even used it with a small power amp for one or two seasons on 6 m and was quite satisfied. We also put it into temporary duty for the DB0UM/B beacon for a few month’ a few years ago. Now packing everything for our move of house it was about time to get it on the air once more. 😉

It still works perfectly well. I made a few QSOs on all of it’s four bands this afternoon. And it still gets unsolicited good audio reports! Nevertheless I meanwhile prefer all the new technology and don’t want to miss the bandscope in the ‘7300 on 4 m anymore. It was a clear advantage this afternoon again seeing the SV beacons suddenly pop up as well as SV’s calling CQ on 70.200 as well as signals showing up on 70.154, the FT8 frequency. Nice to get a feeling for band conditions visually, too!

While scanning around 6 m I stumbled across some strange QRM, see the following screenshot. Think it’s some kind of OHR (over the horizon radar). 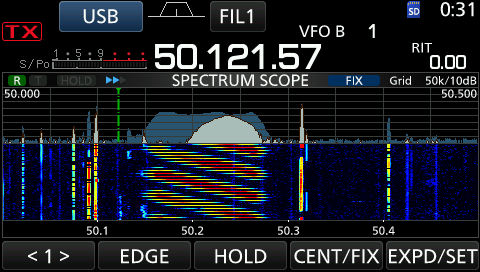 Spectrum of some wideband QRM, probably caused by an OHR.

I know there are a few OHRs in Russia (often to be seen on 20 m) as well as the famous one in Cyprus that regularly killed parts of the 10 m band during sunspot maximum. But I have never seen one on 6 m yet?!