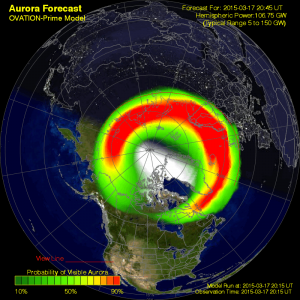 Thanks to the phone alert by Heiko, DG1BHA, I managed to get out of QRL not too late yesterday evening. There was a very strong Aurora going on and Heiko being at our station had already worked over 20 stations on 2 m SSB which is really demanding and needs very strong Aurora condx – CW sure is the easier mode for Aurora as it is much easier to decode with the raspy audio distortion. 😉 A few examples of how SSB Aurora sounds can be found on my Youtube channel. These were recorded during the great opening in July 2012.

I was right on time for when the Aurora got so strong it even enabled contacts into Southern Europe! This only happens about 3-4 times per solar cycle … if it is an intensive one! The current cycle is a rather weak one so this was just the second AU opening that I’m aware of that brought condx for Southern Europe, too. So it was very nice to see all the great VHF’ers in HA, 9A, etc. on Aurora for a change and even IK3VZO was worked! 😎

What was also interesting is I had to regularly change antenna direction. Reflection zones were scattered between 290 and 70 degrees! There were times when even the G & GM stations were only audible when beaming 70°, wow! Unfortunately there was no possibility to work any UA stations until very late in the evening. It seemed the reflection zone was so far south it also blocked DX into east. When it was finally possible to work into Russia I stumbled across RV3YM in KO63. This would have been a new square but unfortunately it was not his frequency so I lost him. Never heard him back so was quite sad for the moment. But luckily condx got better again about an hour later when I finally found him CQing and bingo, #508 on 2 m worked. 🙂

I was a bit shocked when RK9AT called me while CQing! Thoughts already started spinning … oh wow, UA9 on 2 m, fantastic, this must be a new record, a.s.o. 😮 But when he repeated his callsign a 2nd time I recognized he was /3 so “only” in UA3 but still some very nice DX! 😉

Around 20z it seemed to be over so Heiko called it a day with 32 SSB-QSOs in the log. I think we were below the reflection zone ourselves in JO73 then. About an hour later the Aurora was even visible down in Austria! Now that is neat! Sure the webcam’s height of 2.970 m ASL helped to extend the visible horizon a few hundred kilometers. Weather was also superb with clear blue sky during the day so that helped, too. Heiko reported to have seen some weak visual Aurora as well. Just click on the right hand picture to get to the originating website. Isn’t that fantastic? 🙂

I did not think of switching on the audio recorder early enough so only two recordings this time, but both being real good DX!

I made some 85 QSOs in total, you can view the full log here. The most distant contacts, i.e. over 800 km, were made with these great guys:

I decided to call it a day at 1:30 A.M. while the Aurora was still in full swing, although moved up North. This sure was a real fun evening! I was indeed a bit exhausted after 10 hours in QRL and another 7 hours straight on the radio but it was definitely worth it. 😉

This entry was posted in Audio recordings, Aurora, Propagation, VHF. Bookmark the permalink.