Coming home from QRL switched on the radio to check condx. Found ZD8N pounding in on 10 CW, worked with just one call. 🙂 Saw 6 & 4 m spots on the cluster so went to check six. Nothing heard. Scanning the CW band again and suddenly hearing C5YK at up to 599 calling lonely. Certainly ES + TEP linked propagation. Quickly worked him and spotted afterwards … oh, suddenly life on the band. 😉 Yes, it always pays off to spin the dial oneself instead of only relying on the cluster. Made a nice audio recording of him …

Nothing else heard. Then saw I8/UT3UX spotted on the cluster working FSK441 on 2 m via Meteor Scatter. Took about 20 minutes to complete and worked a new square with JM88, too. 🙂

Grabbed ZD8N on 10 SSB, too, then 6 m opened a bit via Sporadic E into the Ukraine but signals very much up & down, lots of QSB, not very stable. Went down to 12 m and easily worked a few US west coast guys. Condx picked up nicely during the last few days! Thought it might be worthwhile to check 10 m, too. 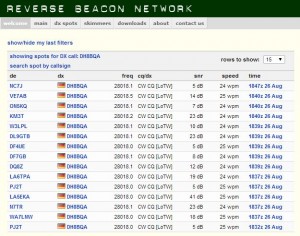 The band was well open all over Europe via Sporadic E but besides ZD8N no interesting DX heard. So I thought lets see if signals do cross the pond on 10 m, too. Skimmers on the Reverse Beacon Network are a good opportunity to check condx. And boy, we had condx! Worked a number of guys on the west coast on 10 m, some of them being real 599, nice! 🙂 But it was very selective and I’m not sure yet what it was, either multi-hop ES or rather ES + F2. Suppose ES for the first hop (EI’s & G’s were booming in supporting that theory) and then F2 layer propagation (backed by the nice 12 m condx). Worked guys from WA, CA, AR, AZ, WY, TX & MO. AC7AF in Wyoming was a nice catch after digging him out of the noise as he was using just 80 watts into an Inverted-L antenna. Unfortunately activity was not very high so not many QSOs made. Probably due to being in the middle of the week and not many expecting such an opening so not many checking 10 m. Besides skimmers I got even spotted on the normal cluster but that didn’t help much, either. 🙁 Checking 6 m again it was still (or again) open via ES into EI (backing my theory above). Made a few more QSOs on 12 m and working my way down to 10 MHz were I worked a few new ones, too (which is not difficult still being below the 100 DXCC mark on that band, hi). All in all quite nice evening. 😉