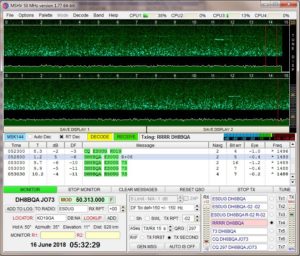 Unfortunately not that much to report. I had blocked the weekend for the IARU Region 1 50 MHz contest but conditions were basically non-existent. A few Meteor Scatter contacts every now and then, nothing else worth mentioning on Saturday. 🙁 On the positive side it was easy to catch the ESØUG guys via Meteor Scatter now from KO19 on 6 & 4 m for a new one. 😎 Despite showing a 6 m frequency the screenshot right was from our 4 m QSO, I had just switched back to 6 m FT8 for monitoring already when taking the screenshot. 😉

What I had totally forgotten about was that the AGCW-DL VHF contest was on Saturday afternoon, too. So I did only spent the second half in the contest (really need to put a marker on the calendar …). This is a fine small 3 hours CW-only VHF (and another hour UHF) contest 4 times a year in which besides the “normal” exchange (i.e. RST, serial number & locator) also the power category is sent, i.e. A = max. 5 watts, B = max. 50 watts and C = more than 50 watts. So you get quite a good feeling what’s needed to bridge certain distances. It’s always astounding to see what works with small power using CW, my two most distant QSOs were with low power stations! These were the TOP 10 contacts by distance:

Sunday was still rather bad conditions-wise, 50 MHz only really opened for the last hour of the contest into the Mediterranean with only sparse activity but great signals. Nevertheless with a good 15 minutes or so opening Sunday morning via double-hop ES to the Arabian Peninsula we had a highlight, too! It’s rare that we are in the middle of the propagation focus to hear such strong DX signals up here:

In general I find that this year’s Sporadic-E season is rather bad so far. Maybe I still have too good memories of last year when May & June were really brilliant! On the other handside July was a catastrophy with almost no openings at all so maybe it’s just the other way round this year? Hope is the last to die. 😉