Started playing with the satellite function of our IC-9700 during the last few days to escape the boredom of too few MS reflections. 😉 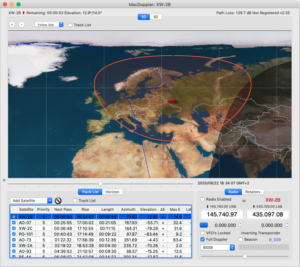 I made my first satellite QSOs back in 1992 not much later than getting my first VHF license. Back then it meant the world to me being able to work biiig distances with my small equipment. My favourite sat was the Russian RS-10/11 which was very sensitive so 20 watts into a half-wave vertical on the 2 m uplink produced a loud and clear signal on the 10 m downlink with just a simple wire antenna. Due to it’s height in orbit QSOs could easily be made up to about 4.000 km. 😎 A few portable activities a few years later gave access to AO-13 with it’s “world-wide” foot print and much more DX, too. Was active until about 1997 then starting QRL and being hundreds of kilometers away from home with no own station I was not very active anymore and when I had a chance to operate I rather concentrated on contesting on HF and VHF. 😉

Nowadays there’s quite a number of Amateur Radio LEO (Low Earth Orbiting) Satellites in space that allow communication without too much effort. A few FM-only birds (AO-91, AO-92, PO-101) but also a number of sats with linear transponders (XW-2A, XW-2B, XW-2C, CAS-4A, CAS-4B, RS-44). Unfortunately it seems activity on the linear sats has vanished over the years, too. Most of the time I was the only guy on the transponder, quite a pity. Activity there seems to concentrate on the weekends or evening hours.

The contrary on the FM birds, always much activity and people QRM’ing each other more often than needed. Of course this happens, it’s a single channel only, no different to terestrial repeaters. The linear sats would offer much more space for everybody …

I was using the ‘9700 barefoot with a horizontal 10 ele DK7ZB Yagi on 2 m and just a 6 x 5/8 lambda vertical on 70 cm. Not the best setup as both antennas work best at low elevations due to their vertical patterns and both linear polarized. So I had difficulties at times hearing the birds or accessing them but after all still made about 70 QSOs during the last few days with the most enjoyable probably being W2RDJ/FN32 in SSB with over 6.200 km distance through the good old and still sometimes working AO-7. Other good DX included R9LR/MO27 at 3.200 km and EA8/EA4NF from IL39 at 3.400 km on the FM birds.

Unfortunately CN8JQ and OX3AH, which would have been new satellite DXCCs for me, could only be heard …

OX3AH on AO-92 just when ‘loosing’ the satellite here:

More information about Amateur Radio Satellites can be found on the websites of AMSAT, AMSAT-UK, AMSAT-DL and many others (Google’s your friend). Here are a few more sound snippets if all this is new to you. Stereo audio, left channel is satellite RX, right channel local audio.

AO-92/Fox-1D ID’ing itself (whenever it crosses from light into darkness?):

UT5EDU worked on PO-101 (a rather difficult bird):

This entry was posted in Audio recordings, Satellite, UHF, VHF. Bookmark the permalink.