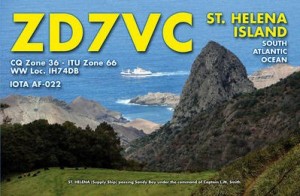 What a nice evening! Did not do many QSOs on 6 m this season yet although there were already a few openings. Either skip was not right from “blackhole” JO73 or I was not at the station. Tonight has been a different matter. Got a phone alert from Sandro, DD3SP, reporting he had just worked ZD7VC on 6 m. Station was on but I was doing other things around so went over to the desk and sure enough he was audible, although just above the noise (he was 55-57 about 100 km more south … location, location, location

). Tried calling but everybody else had a better skip. Bruce once came back with DH8 and another time with BQA but no complete QSO. He soon vanished into the noise so I already thought that was it. Kept the frequency on while doing other things again when he suddenly returned about 10 minutes later. Not louder than 52 on the meter but after 2 calls (and nobody else calling, the pile-up started again just after my QSO – lucky!) we had a complete QSO. 🙂 About 2 minutes later he was gone again and never heard back. So you really have to be there at the right time, no mercy! It’s been a while since I last worked a new one on 6 m so quite happy. 😉

This entry was posted in DX, VHF. Bookmark the permalink.