A transverter interface for the ‘7300 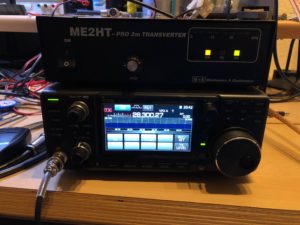 After the quite good experience with the Icom IC-7300 during WPX-CW I thought it might be a nice idea to also try it out with a transverter on 2 m in the big VHF contest in two weeks. When searching around for information about the ‘7300 a few weeks (or was it month’?) ago I came across a few websites that described solutions how to interface transverters to the transceiver. The most intriguing one was the one by DB6NT (yes, he of Microwave transverter fame): Michael developed a small PCB that could be built into the transceiver instead of the external tuner interface providing low power output (around 0,3 mW) as well as receive input. It consists of only a few parts and is well designed, i.e. when you apply 12 V power to it small relays switch TX & RX to Cinch sockets while without power it all goes the normal way, i.e. taking the PA stages, etc. 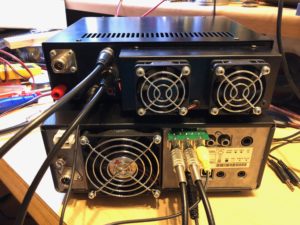 A really clever design! And inexpensive, too! So I bought a kit at his booth during the HAMRADIO fair in Friedrichshafen early June and now finally got around to assemble it and build it into the IC-7300. The trickiest part certainly was soldering the small 0805 SMD parts to the PCB but with only a few of them widely spaced everybody should be able to do it. Unfortunately I didn’t take photos of inside the transceiver but Michael has a great step-by-step tutorial on his website which shows the innards, too, if you’re interested. I also built a dedicated set of cables for the combination, i.e. BNC-to-Cinch for the RF lines as well as 12 V to power the transverter board plus PTT out from the 7300’s 13 pin ACC socket. For a more permanent setup it would of course be more comfortable to have a way of switching the board’s power on & off, i.e. by a switch or the like …

Setting it all up and seeing how big the transverter (an HA1YA one) is compared to the transceiver (or the other way round: how small the ‘7300 is compared to the transverter) I was fascinated again how much technology and functionality you can squeeze into such a small box nowadays. 😎 The only “drawback” of the combination is the ‘7300 does not support a transverter frequency display, i.e. you can’t set the display to show the end frequency like 144.300 MHz but will only see the IF frequency (28.300 MHz in this case). But that is really nitpicking taking the transceiver’s price into account. 😉 What you can also see if you take a closer look at the spectrum display shown on the front photo is that my SPS is switching at around 38 Hz. 😉 Band noise will probably cover it well enough else I can still switch over to a linear power supply. I tested it already and with that one the spectrum is perfectly clean, I was just too lazy to take a new photo. 😉

Now I’m eager to see how the combination will perform during the contest! Will keep you posted, of course. 😉

This entry was posted in Contesting, Equipment, VHF. Bookmark the permalink.